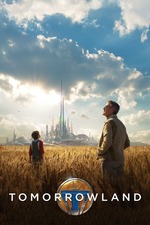 Tomorrowland is an utopia that allows the dreamers in our world to improve it by being free to be creative. Once rid of things regarded as distractions that got in the way, such as politics and burocracy, our greatest minds can live in a place that stimulates and encourages them to build a perfect society. The movie presents us how our world should be.

Or does it? Because for the most part of the movie the characters are busy escaping robots in many sequences while we as the audience have little to no information as to who their escaping from, what they're suppose to do and why they're the ones supposed to do it. Instead of learning about how this society functions and what they've done to make it work, we just follow around our heroes not doing much until the third act finally comes to bring some development.

It's unfortunate that a movie whose message is about creativity doesn't live up to the same promisse in its narrative. Our main character, Casey, is said throughtout the story to be special, while the two others believes that she's capable of fixing the world (George Clooney's Frank gets that conviction quite suddenly, I should say), and yet all that expectation is fulfilled in one, quite ridiculous, epiphany: Our hero decides to shut down a machine — And I know you don't even need context to see how that's a frustrating culmination. There was a time in Cinema that a chosen one would earn its title. He woulld stop bullets with his hand and destroy an enemy by diving inside him. Now the chosen one proves herself by having the most banal of ideas.

In the end, Tomorrowland has the heart in the right place. The message at the end is one of hope and inspires for a better future. Sadly, the movie itself doesn't strive to the same level as its story intents to.