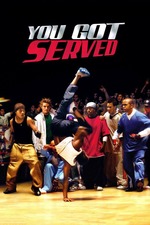 The greatest documentary of the Era when street dancing was a thing, known as the 2000's. This movie got me into dancing the same way Space Jam got me into basketball. Good times.

Seriously though, the movie might not be great, but the dance sequences are. Some of the stuff here continues to impress me the same way it did when I was a teenager. There's a lot of elaborate choreographies and the Directing makes these showdowns quite energetic.

Also, this is where I've met Steve Harvey, which became useful knowledge in 2015.

Elite Squad: The Enemy Within