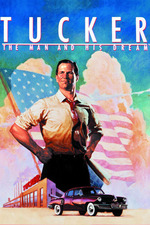 Tucker: The Man and His Dream

Tucker: The Man and His Dream is a loving ode to the American build-it mentality that created immense prosperity post-WWII, but also created a wall to not let new competition enter the fold once prosperity had been consolidated to “enough companies.” Tucker (Jeff Bridges) designed cars that should have been allowed to compete with the Big Three (Ford, General Motors, and Chrysler) but their bigness gave way to big corporate protections within the very halls of government. Think of the last two big bailouts this century and how many potential Tuckers and their dreams have gone unrealized because the U.S. government favors the establishment. Too Big to Fail first set its teeth in America post-FDR.

Francis Ford Coppola's automotive epic uses sets built on Coppola’s massive Zoetrope Studios to transition from diner phone calls to hangar car production within one shot; the sets operating as a physical split screen which affords the pace of the film immense zip and vigor, allowing the camera to be taken by the unbridled spirit of innovation that Coppola is documenting. Of course, it didn't hurt to have George Lucas' extra money for production costs (Lucas and Coppola are car enthusiasts and each one of the only futuristic Tucker cars). But for all the lovely transitions between walls, the most important transition is Coppola's film moving from blind optimism to soul crushing defeat without ever losing the buoyant tone.

Tucker is Coppola working at his most passionate after doing teen greaser adaptations to recoup the losses from his original musical, One from the Heart (also highly recommended, particularly if you love the sets and camerawork here). Tucker has a car chase to end all car chase scenes because Tucker's car can double the speed of all cop cars in pursuit. They just give up. That such a scene is bookended with Joan Allen jokingly showing ankle with her hitch-a-ride thumb out and ends with family ice cream sundaes gives you a good sense of the ethereal cylinders that Coppola's running on. It's a little madcap! Nothing exemplifies that more than Lloyd Bridges' Senator on the take, who has one of the finest Capitol Hill scenes as he never stops speaking during his meeting with Tucker but never actually talks about what he was invited to have a meeting for.

With ace cinematographer Vittorio Storaro adding Apocalypse Now orange hues to the car production and courtroom scenes, Coppola's film operates like a setting sun. A sun that's setting on American business freedoms, choosing to instead favor that the biggest get bigger. A sun that's setting on a film full of energy, like sitting on the porch with a mint julep after a highly productive day. And a sun that eventually rises anew with pep and vigor because American innovation can get knocked down but it finds its way into offshoot new ideas. Hey, at least we got seatbelts out of this whole debacle!