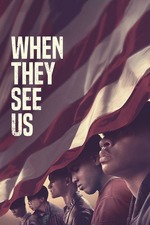 My second interview ever was with four of The Central Park Five for the festival debut of Ken Burns' doc. It was November 2012, we still had Obama and Trump was the laughing stock of the nation following his failed Birtherism pursuits and Obama was re-elected. Black Lives Matter wouldn't become an official movement yet, though that's only because it didn't have a name, Trayvon Martin had been murdered and his murderer was set free because the jury agreed that he perceived a threat by a young black boy wearing a hoodie in his neighborhood.

I've thought about that interview often, primarily because it's the most meaningful one I've been involved with—talking with black men whose young lives were ruined by our police and judicial system via forced confessions, a wrongful conviction, and a media circus and not just what it means to direct or act certain movies—but also because the young man who suffered the most, Korey Wise, was perhaps the most compassionate, thoughtful, and tender. He chose his words wisely and economically but there was an obvious darkness that he had witnessed that the doc wasn't able to tap into and nor our conversation. And while Ava DuVernay's mini-series is infuriating and necessary to watch for the railroading episodes—and the real footage of Donald Trump, an absolute stain on the American process of law and order for three decades plus, calling for the death penalty of teenagers who had not even been proven guilty nor had any DNA evidence used against them—it's episode 4 that hit me the hardest. It hit me the hardest because that's Korey Wise's episode. That fills in the dots that couldn't be connected in a documentary let alone a 30-minute interview with a new journalist. What he endured, how he endured, and the reasons for being there—just going with a friend down to the Police Station so they wouldn't be alone with the cops and then getting pinned into the fabricated story and later abandoned by the same friend—and having to go it alone at age 16 in the adult prison with a code of breaking down new arrivals; holy shit. Episode 4 is what I needed to see, having known the rest of the story, and Jharrel Jerome is phenomenal. Episode 4 also has a heartbreaking aside to Korey's trans sister who was murdered, an extra wrinkle, particularly being watched during Pride Month, to the title. When They See Us not only applies to positions of police and the judicial system, but also, for a 20-minute section, the black trans community, the most vulnerable of the entire LGBTQ population in America. Three black trans women were murdered in the month of May 2019. And when Korey's sister is seen, a double take is done by two men walking by, a slur is uttered. And through Korey's immense pain in lost years to adult brutality at the age of 16, robbing him of years of discovery, he was also robbed of seeing his sister transition and mourning that loss. Episode 4 is a gut punch and even if you think you know the story of the Exonerated Five, this episode alone is worth a watch.

The rest of When They See Us is also quite good. The third episode pales in comparison to the preceding and following, but it's a worthy entry, a reminder of the labyrinth of rules that follow release from prison; the job force doesn't want you, the neighborhood doesn't want you, it's very hard to get a fresh start. Compound that times 1,000 when your name is synonymous with a Donald Trump death penalty full page ad. Still, this adult section oddly fetishizes the boys to men portion, choosing to focus on romantic pursuits and sexy bodies of the grown men. But while the third section might loose footing, DuVernay's introduction is fantastic. She eschews introducing the boys with a lengthy introduction by showing them in school, at home, etc. Instead she drops them right into the night when they all ran into the park because there was a group of boys and friends of their's attaching themselves to a pack. This is a lovely gesture because so often when young black men are killed by police their lives are given a fine tooth comb to prove that their life had value or, if trying to prove the opposite point, that they were a bad egg who created trouble and thus probably were in the wrong. Instead of showing us anything of their lives prior, DuVernay says, no, a child's life is worth something regardless of grades and interactions. We should always have empathy for a child, regardless of any strokes of greatness and creativity or exposing flaws or faults they had prior to something terrible happening. She drops us right into the scrum and it's incredibly effective not just in assuring empathy from the outset but also in how chaotic that evening was in Central Park.

The trial is infuriating and necessary for everyone to watch. And while some of the lines on Trump might be a little too on-the-nose ("I hope his 15 minutes of fame are up soon.") it's delicious that Felicity Huffman played the careerist District Attorney as a complete heel and that this aired weeks after the actress herself pled guilty to gate-keeping bribery schemes. The DA who, like Trump, is unapologetic about her orchestration of this case, including the fake news of "wilding" teens running amok in New York City with murder and rape of white people in their hearts.

You might think you know the whole story of the Central Park Five but there's still a lot to learn here. You might think that this will be too upsetting to watch and it is. So you should.