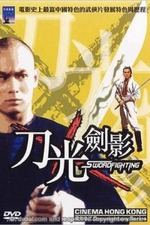 Another one in the three-part series on the Shaw Brothers. This one focuses on Wuxia or sword fighting fantasy films. For a 50 minute documentary this actually does a fine job of introducing people to this genre and giving them a good taste of what it offers. Which is a wonderful world of heroics, sacrifice, betrayal, stunning action choreography and beautiful sets of ancient China. The film gives some background to the whole genre going back to silent film before it moves into the Shaw films. Hugely popular genre I would say between 1965 to 1975 or so before kung fu films took over. But still a staple of Chinese cinema today. It never went away with people like Tsui Hark making them and then the stunning post-2000 films like Hero, House of Flying Daggers and of course Crouching Tiger, Hidden Dragon.

Four directors are rightfully selected to focus on - King Hu who reinvented the genre, Chang Cheh who added extreme violence and masculinity, Chor Yuen who dazzled with his visuals and elegance and Lau Kar-leung who threw in exotic weapons and intricate choreography that he then transitioned to kung fu films. Lots of lovely clips, a few interviews and some of the major films discussed. Nothing new for people already into this stuff but a good primer for those who are not. And it was nice to see again.

The Woman in White