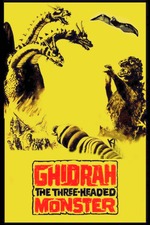 Still dipping my feet into the world of Japanese monsters. It is a puzzling universe. On one hand the films depict Japan as this very normal place - people go about their every day affairs, go to work, get married, raise a family, go sightseeing, drink too much on Saturday nights - and yet in the space of only a few years they have been attacked by Godzilla four times, have encountered a giant moth twice, seen King Kong, had some giant pre-historic bird come alive, had the two fairies appear on TV and now they get Ghidorah, Godzilla, Mothra and Rodan all at once. But they just go about their lives. Is there no sense of why us? Is it because of the Americans and nuclear weapons - or is it karma for their horrific war crimes? Do people think about this?

I can imagine if Godzilla showed up today in America. The QAnon nuts would think Godzilla was here to install Trump as President, the NRA would be saying see we told you those guns would come in handy, the liberals would be demanding an environmental assessment before we attacked Godzilla, the religious right would be blaming this on homosexuality and saying End Times, a Godzilla Cult would start up selling T-shirts, the Republicans would be blaming the Democrats and the Democrats would be blaming the Republicans and even with a monster here the divide would just get larger sort of like covid. But the Japanese just huddle together and as the General says "we will do our best".

This film followed the last one I saw - Mothra vs Godzilla - and is connected to that one. Strange things are happening in Japan - it is very warm in January, there are constant meteor showers and suspected sighting of UFOs. In other words a typical day in Japan. You can even turn on the TV to an entertainment show and see our girls, the twin fairies (Emi and Yumi Ito) appear and show us telepathically Mothra and the tribe once again dancing back at Infant Island. Mothra is still a larva. All is well in the world. For a few minutes. Then Rodan who we haven't seen since Rodan (1956) comes out from under a pile of rocks. Eight years is a long time to be under rocks. He might be irritable. And sure enough Godzilla makes an appearance out of the ocean and blows up a ship as if to say, don't forget about me. How could we. The first sighting of Godzilla is always a special moment. Rodan and Godzilla tussle about but seem to be an equal match. It is more of a show me some respect match.

Meanwhile among the humans - a news reporter played by Yuriko Hoshi who was in the previous film but as a slightly different character is on top of the story and her brother (Yôsuke Natsuki) is assigned to protect the Princess Selina of Seigna ( Akiko Wakabayashi - who had been in King Kong vs Godzilla). Seigna you ask? Apparently a small country in the Himalayas where they speak and look Japanese but wear big collared attire from the Court of Charles I. Anyway, people back home want her dead and blow up her plane - but not before some mystical force pulls her out and sets her down on earth but now thinking she is from Jupiter and warning the world that Ghidorah will destroy the earth. Ghidorah does in fact show up and he is a ball-buster - three heads, wings and can shoot lasers out of each mouth. I think I dated her years ago. Godzilla, Mothra and Rodan are punks compared to this guy. But if they were to unite? Turns out Godzilla has a good right arm and really just wants to pitch for the Yomiuri Giants.

These films squeeze a lot of stuff into their 90 minutes running time. Hectic and chaotic but good fun jumping back and forth between plot lines like a yoyo. The fights are on one level pretty awful - Ghidorah keeps zapping Godzilla in the butt and gonads and at one point Godzilla and Rodan play volleyball with rocks. But who cares. It's great. The little kid in me says so. But now at some point I feel like I have to see the first Mothra film and Rodan. The circle just keeps getting bigger.