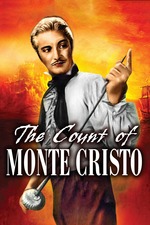 The Count of Monte Cristo

One of Alexander Dumas's great tales along with the Musketeers and The Man in the Iron Mask. He could have made millions if only there had been movies back then. I am not sure if Dumas was paid by the page or if his work was published in installments - but his books are very long, very complicated, full of twists, turns and coincidences - and not easy to simplify. The entire story of the Musketeers could never be put on film unless someone made a very long series out of it. And The Count was published in 18 novels. 18 novels! Think about that and the challenge of making a 107 minute film out of it. Mind you, not that I have read the 18 novels or even one novel. Or even the abridged version but I did read the Classic Comic of it.

So it is impossible to say that this film follows the book but as best as I can tell the general plot of the film follows the books at a high level. Though the ending of the film is a complete hash of romance that in no way resembles the book. In the film the Count marries his long lost love - in the book he goes off with a slave that he bought when she was eleven years old. So not quite the same. Still we should judge films on themselves as if they are vacuum sealed and in that respect this is a fine old traditional film - well shot, well acted (though not a lot of star power - not even Donat at the time), decent production values and a good script. It is not British but it has that Korda feel to it (and in fact Donat was signed to Korda who lent him out for this film). Very proper, very classic. And the lead is Robert Donat and who could be more British than Mr. Chips. Due to illness, Donat did not make that many films but I have been a fan ever since I saw him in The 39 Steps which followed this film. And which I now feel like I have to see again. I wish he had made more films (about 20 of them).

The gist of the story is I think well-known - if not find the Classic Comic. Donat plays Edmond Dantes, a French sailor who is asked by his dying captain to deliver a letter to someone who will make themselves known. He is also in love with Mercedes (Elissa Landi) and they plan to marry. But the note is for pro-Bonaparte partisans who have plans to spring the ex-Emperor from Elba. Dantes has no idea what is in the letter but is caught handing it over and three men all have their own reasons for framing him and sending him to prison where the warden is told to lose the records and declare him dead.

Years later he and an old Abbe dig their way out but the old man dies in an accident but not before he tells Dantes where a huge - and I mean huge - treasure is hidden. Dantes escapes and reappears as the Count of Monte Cristo with plans of revenge against those three men who are now rich and one of them married to the woman he loved. Donat gives a grand speech at one point which is just pure gold for me. All good stuff. I always enjoy these sorts of old films.