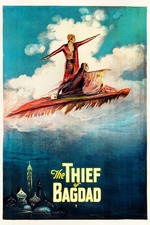 Remarkable. Like a seven layered dream fevered fantasy. Apparently, this film didn't do as well at the box office as hoped for with a budget that was then the biggest ever. Perhaps there wasn't as much swashbuckling and derring-do as people expected from Douglas Fairbanks after Robin Hood, The Three Musketeers and Zorro. He was famous for his amazing stunts, high wire acts and sword play. None that this film really offers. Instead, it is a spectacular imaginative fantasy that explodes with creativity and energy. It is a silent film of course - the version I saw has an endless stream of music from Rimsky-Korsakov (Scheherazade mainly) - but many scenes are tinted red or green or yellow.

The star of the film is really the production design from the legendary William Cameron Menzies and the costumes by future director Mitchell Leisen. They astonish and overwhelm everything else including Fairbanks and the story taken from the Arabian Nights. Menzies created a design that was Arabic Fantastique with strong elements of expressionism and a wild sensibility that feels like Alice in Wonderland on drugs. Everything is grand, exaggerated, a feast for the eyes. Giant walls, a gate that closes like a sharp fanged mouth, a gong that needs five men to bang it, huge halls and winding stairs. There is so much detail in the myriad of exotic costumes and decorations that the eye can't really take it in. There are so many places where you could just stop the film and snap a beautiful photo. Fairbanks produced this and had a hand in every detail with Menzies and Leisen following through on his suggestions and then director Raoul Walsh putting it all together. For 140 minutes of non-stop wow. Right till the end when an incredible scene takes place in which the Mongol troops reveal themselves from within the city and march like Star Wars Storm Troopers, And for its time the special effects were first rate - a flying carpet, an invisible coat, monsters, a flying horse.

The story itself is less effective. Fairbanks is the thief of Bagdad. A happy scoundrel, a petty street thief with grand ambitions. The fabulous sets are just a playground for him as he can climb into any place he wants and at one time uses a magic rope to climb up. He wants bigger loot though and breaks into the Palace to steal the gifts of three suitors for the hand of the Princess (Julanne Johnston) but once he sees her sleeping in a giant luxurious bed with her three female slaves in waiting, he decides he would rather have her. One of her slaves is played by Anna May Wong who is an informer for one of the suitors - the evil Mongol Prince (Japanese actor Sôjin Kamiyama who later appeared in Seven Samurai and many other Japanese films as well as American ones. Need to read up on him. He is great in this - almost insect like at times). Anna May Wong doesn't have a large part but she is crucial and looks fantastic.

He pretends to be a Prince and be one of the suitors - and she falls in love with him and when he is discovered (by Wong) she saves him. She gives her suitors a challenge - in Seven Moons find me the rarest treasure in the world. Off they go. So does Fairbanks. So this gives Menzies the opportunity for more fantastic designs. At 140 minutes it is probably too long - I had to take a break - but I am not sure what I would cut out. Maybe a bit of Fairbanks who plays this with great gusto and broad expressions - at times like ballet, at times a grand opera in his body movement and facial expressions. But it fits into this film in which everything is bigger than life.

As a historical note - though the Mongols fail here in real life in 1258 they took Bagdad, killed nearly everyone inside and razed the city. At the time Bagdad was considered one of the most advanced cities in the world with a huge library of pretty much every work and scientists and artists from all over the world. It was the Capital of the Abbasid Caliphate which ruled much of the Muslim world. The film is interesting in how much respect it pays to Islam with quotes from the Koran, a wise holy man, prayer and such. Nice to see we weren't always Islamophobic. Not so nice to the Mongols though! For burning the library a thousand curses!

It is up on YouTube. Make sure you watch the restored version.