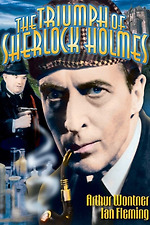 This is the fourth of the five films in which Arthur Wontner starred as Sherlock Holmes. Wontner was highly acclaimed at the time as the perfect Holmes but within a few years the Basil Rathbone films were to overshadow his. These are British productions with much lower budgets than those that came out of Hollywood - and it doesn't help that the DVDs I have were put out for bargain bin consumption. The sound and visuals are quite murky and at times a chore to follow. I saw that a few of them on sale now claim to have been digitally restored which is great if true.

This is actually quite decent once I got used to this Holmes and Watson. Wontner plays Holmes with much less dash, charisma and energy than Rathbone - more cerebral puffing away on his pipe and Watson who is played by Ian Fleming - no, not that Ian Fleming - isn't the comic foil that Nigel Bruce was. Still not exactly bright but as lovable as Bruce's performances are, they are miles from the Watson of the books. This is based on Conan Doyle's The Valley of Fear, a book as opposed to a short story, written in 1914 for The Strand Magazine. Doyle based it on a true story of a Pinkerton detective infiltrating the Molly Maguires. In his books Doyle often relied on a lengthy flashback as he does here. In A Study in Scarlet the flashback took place in Utah about the Mormons; in The Sign of the Four it was in India and Valley of Fear has a flashback to America. The film follows the book to a large extant with a few minor and major changes.

One of the changes is that Holmes is retiring and ready to move to the country with Mrs. Hudson in tow. But before he leaves he receives a visitor - the dreaded Professor Moriarty (Lyn Harding) - warning Holmes to stay retired. For all his fame Moriarty only appeared in two of Doyle's stories - this one and in The Final Problem where Holmes and Moriarty met their deaths (until Doyle was forced to bring Holmes back to life a few years later). Wonter was 60 years old at the time, so this makes sense. So he goes out to the country to care for his bees until he gets a cipher from one of his informers notifying him that a John Douglas (Leslie Perrins) is going to get murdered by an agent of Moriarty. Holmes rushes off but it is too late. But Holmes digs deeper and gets the story from his wife about her husband being a Pinkerton detective and the gang he put behind bars looking for revenge all the way to England. I like anything Sherlock related no matter the genre and this was certainly passable if far from imaginative.