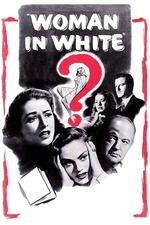 Enjoyable gothic tale based on the book from Wilkie Collins back in 1859. I read this and his other classic The Moonstone back in the Iron Age and recall enjoying them both and have been meaning to have another go at them because I don't remember any of the details. Well, maybe now I don't have to read The Woman in White though these adaptations tend to make up a lot of things and forget others. This is kind of an anti-Jane Austen story about a well-to-do family living on an estate. The relatives, the servants, the trips abroad - a beautiful cousin with no means who has to depend on the kindness of her wealthy relatives. The handsome teacher who shows up and instantly makes a line for the lovely daughter and future inheritor leaving the cousin in a state of expected dejection. But unlike the Austen stories which have their low moments but are still full of wit, friends and family, the Woman in White is all darkness and gloom. Plots afoot, a bit of insanity, secrets abound. The film does a good job of surrounding this with an atmosphere of dread.

Walter, an art teacher, comes to Limmeridge House to teach painting and drawing to one of the residents. But on his way at night he is approached by a woman in white who beseeches him to help her and makes little sense in her confusing narration - and then as a coach nears, she runs off into the woods. She is an ethereal and beautiful creature. So imagine his surprise when the next day he meets his pupil, Laura, and it is her. No, wait - it isn't - just an incredible resemblance. In this estate is a neurotic uncle who never leaves his room and falls apart at anything, Laura, the cousin Marian, their constant guest Count Fosco who seems to have control over the uncle and over Laura as well. He is trying to convince her to marry a Sir - who is penniless and very much wants her future fortune, Into this walks the art teacher and immediately falls in love with Laura. Though the film comes in at a hearty 109 minutes, the ending feels very rushed and the postscript very banal. There was room in there for a more suspenseful finish.

It does create a degree of suspense though the motives of everyone are pretty clear. The casting is fine - in particular Sydney Greenstreet as the smooth and pernicious Count Fosco. Directors knew how to photograph Greenstreet from below making him look huge and menacing and his slow deliberate speech makes you pay attention to every word and expression like a hypnotic cobra raising its head. His wife is played by Agnes Moorehead as dour a woman as you would ever want to meet, the cousin is Alexis Smith, Laura and her double is Eleanor Parker and the hero is Gig Young.

I don't think I have ever seen Gig Young look well, so young. He is ok but nothing to get very excited about. A George Sanders or Ronald Colman would have raised the film a few notches as the role clearly calls for an English actor. I have only seen him as middle-aged. Within ten years he looked quite older and often played the straight man who lost the girl. He was a well-known alcoholic and it aged him quickly. He was replaced by Gene Wilder on Blazing Saddles because he was having drunken delusions. Tragically, he married for the fifth time when he was 64 and two months later shot and killed his wife and then shot himself.