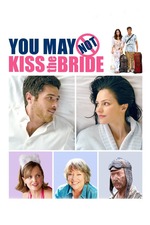 You May Not Kiss the Bride

I kind of enjoyed this silly movie where a professional pet photographer is blackmailed into marrying a mobster's daughter before her green card expires. Doesn't hurt that she looks like MCPhee.

Yes, I know McPhee is a joke in her personal life of dating old dudes, but she's still a gorgeous woman with a lot of charm. And then add in Suvari and Carrere, and then have them run around in mostly bikinis and that's enough eye candy to make the silliness of the story tolerable.

On the 'fake' Honeymoon, McPhee is kidnapped and the mob figures the husband is pulling a scam on them, while the husband is actually out looking for her, as in an obvious twist, he has fallen for his fake wife.

I thought it was a pretty enjoyable flick, but its cast is mostly why I had fun with this one. A many actors I've always enjoyed, a few I have actually met. And I always have a soft spot for McPhee, always have.