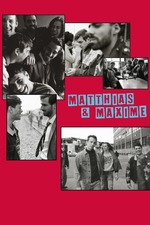 I thought with Xavier Dolan going back to Quebec, and casting local actors and friends again that Matthias et Maxime would be a return to his films that I most cherish. Sadly, this film, along with It’s Only the End of the World make up the bottom two efforts in his filmography. And that’s not to say that they are bad (well, I don't really even want to try to defend It’s Only the End of the World), it’s just not what I expect when I hear that Dolan is making a new film. I think that I am too forgiving and maybe give him too many chances. And I will give him yet another chance with his next film, I’m sure. Maybe one day I’ll stop, but the fact that he has made three films that I consider to be masterpieces, one of them being one of my favourite films of all time (I Killed My Mother & Laurence Anyways, and of course my favourite: Mommy), it’s hard not to be optimistic in some way.

What I do like about this film: the visual style, some of the scenes and dialogue, and Xavier’s performance. So it’s not all bad. But really, I think he may need to take some time and really think about his next project, and what it should be. My suggestion would be to call up Suzanne Clement & Anne Dorval again (yes, Anne was in this one, but... wasn’t given enough of a character, don’t even get me started tbh) and make something about complicated women, ones that yell and laugh and dance and love so fiercely, because to me, that is the magic of Xavier Dolan.