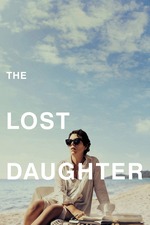 Better than this star rating, probably, but also too schematic to really convey messy, irreconcilable emotions; the mess (visually, structurally, ethically) is all poised and posed *just so* and there’s no residue. Which is a problem for a movie about residue, about what doesn’t evaporate or wash or fade . An “unnatural mother” flashes back whilst on holiday  to the episodes that led her to this late-middle-aged self-assessment; motivation and culpability in matters past and present get doled out in increments, in inches, in shards.  Colman is a technically brilliant actress, obvs - ennobles her profession,  give her all the awards, etc - but she’s surpassed here by Jessie Buckley as her character’s younger self, because Buckley is doing something a bit outside of technique - it’s more like she’s translucent, and I’m in the tank for her completely. I suppose the case can be made that this disparity is a matter of Maggie G’s direction, to show how spontaneity hardens into regretful hindsight, and that’s a good choice if so; from the shooting to the cutting to the music to the particular use of pop cultural allusions, the filmmaker’s choices are uneven. The discarded, dripping, dead-eyed doll Colman’s character  as a form of psychic warfare against another, much younger, comically voluptuous mother is the sort of metaphor that can turn you against a movie for good, and all the signifiers of spoilage, ruin and decay - rotted fruit; battered flesh; shattered glass - pile up in faux-messy little rows. It’s all intentional, all legible, all lucid - and that’s it. I kept hoping that Gylenhaal would actually switch things up a bit, forgo disorientation effects for sustained periods (Ed Harris’ scenes come close) or else let in some real mystery or ambiguity, or an honest to god digression, instead of so many coy, recursive  variations on ideas  that - And I usually hate saying this about movies - I *got* the first time around. There is a movie worth getting here,  but I didn’t get much out of it beyond that.