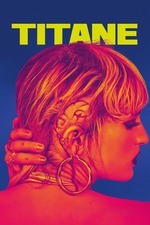 I’ve been trying to put my finger on what bugs me so much about this movie, and sometimes I think it’s as simple as recognizing how hard its director - the very savvy and impressively successful Julia Ducornau - is *trying* to bug me: me, you, and everyone we know, and because Titane won the Palme, everyone you know is going to see it and be obliged to have an opinion on its self-consciously provocative contents, and maybe also on the William Castle-like hype around its festival screenings, which have reportedly seen fainting, barfing, walkouts and the like.

Alexia (Agatha Rouselle) is a sociopath whose serial-murdering habits stem - directly or indirectly, it’s not clear, a loaded vagueness being Titane’s syntax - from a head injury suffered in childhood in a single car automobile accident caused by her dad (Bertrand Bonello).  Her symptoms manifest as first an exhibitionistic auto-eroticism (she makes a writhing spectacle of herself at a Ballardian carnival of horny gearheads) and then impulsive acts of violence that, in the first of Ducorneau’s  (many) aggro storytelling gambits, may not actually be real - may in fact be metaphors for the guilt, shame , and obliterating rage of a young woman left physically and psychically (and sexually?) damaged by her lead-footed dad and searching fruitlessly for succour in the arms of male and female suitors alike.

Metaphors - more like metafives. Everything in Titane is italicized and semioticized, and  in theory, the wild, confrontational implausibility of the first section - which follows Alexia’s predations in the form of a killing spree that spirals further and further out of control, culminating in act of cathartic arson  - heightens the material’s potency in the realm of the symbolic. But Ducorneau’s  gory showmanship nevertheless skirts obnoxiousness a la Refn, Ramsay, Wheatley  and all the other talented, model transnational auteurs mashing up art and grind house tropes en route to festival mainstay status.

Cronenberg and Denis are the obvious elder-god reference points - with the director helpfully making  them herself in interviews -but when Alexia goes on the run post rampage and tries to pass herself off as the missing, likely long-abducted-and-dead son of small town fire marshal Vincent (Vincent Lindon), Titane mutates (not uninterestingly) into a quasi-Dardenne scenario about grief and unconditional love. Call it Le Fils: close-cropped, tight-lipped and surreptitiously binding her breasts above her pregnant belly - oh yeah, she’s pregnant, with another of Ducorneau’s metaphors, a steampunk-eraserhead fetus that may have been conceived while car-fucking and drips oil through every one of its host’s orifices - Alexis isn’t fully convincing as a teenage boy, but her pantomime  of shell shocked trauma and anxiety  is persuasive for being basically real, and anyway, Vincent is so fucked up on drugs and desperate to reconnect with the son he lost (and, it’s implied, may have abused, in a suggestive mirror of Alexis’ origin story) that he lets himself be fooled.

Toting up all the charged ideas and images in Titane would take a long time: incest; pedophilia, gender-fluidity and performance; a woman’s right to choose; a parent’s obligation to protect and accept; a society’s fear of difference. And, yoking then all together, a filmmaker grasping brazenly for the brass ring (or golden Palme) and getting it, for better or worse. I can’t separate Titane’s “unlikely” award canonization from what feel like its likely intentions. What Ducorneau is good at, besides casting and working with actors (both leads are above reproach) is lubricating her ludicrous scenario in enough viscous fluids that it feels transgressive, but not enough to drown  its basic sentimentality , which keeps surfacing at the worst times, more and more as things drag on and she’s forced to show her meagre skills as a dramatist.

To focus on only one of Ducorneau’s influences: say what you will about the Claire Denis of Trouble Every Day and High Life, but she never stooped to broadly pathologizing her characters. By leaving her sex vampires and space convicts  blank, she ensured that their cruelty and compulsions (and erotic urges)  felt universal, and thus implicative- of me and you and everyone we know. Plus, she got kicked out of Cannes with Trouble Every Day, not feted,  and though brilliant, she isn’t a show off. Ducorneau is, however: the twin scenes of Alexis gyrating in front of desirous yet unsettled crowds count as displaced artistic self-portraiture. She throws a lot of New French extremity poses and yet ultimately wants her film to be a warm hug, which I turn makes the suffering - of her characters, and of the audience - worth it. The calculus adds up but comes to almost nothing, for me because dream logic, or metaphorical lucidity, has to be surrendered to fully in order to work as a strategy. Denis, Lynch, and others can pull this off; Titane’s semi-neorealist atrocity exhibition feels like a collision of styles on top of a collision of concepts, and in the end it’s all a lot of smashing, and bludgeoning, and penetration, and goop, and sitting there, mentally counting off the plot points that needed to lock into place so it could hurry up and reach its “transcendent” final set piece, I felt nothing at all.