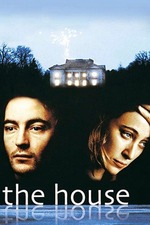 I've recently become nearly convinced that certain films, and The House (1997) by Šarūnas Bartas is one, cannot effectively be the object of in-depth criticism using words. These largely imagistic creations, most often with no dialogue, demand that a critic create their own unified film using their own imagery and associations without dialogue to access the original work's intention and its eventual effect upon the viewer, be they antagonist or advocate, at least in particular subjects of the host film's examination. You may think of it as a living virus which embeds within the world of the first film and reprograms it's cinematic machinery to create dozens of new audio and visual ideas, images, forms, motions, compositions, palettes, timings, cuts, not necessarily in the language of the initial subject but personally integrated into its seeming raison d'etre.

The evolutionary process of film itself would grow into elements and full cinematic units of originality, not homage, imitation, nor satire, but works of impression and influence born and transformed of a worthy progenitor. I'd begun to feel this way about viewing and writing upon experimental, non-linear shorts implementing non-rational subjects, patterns, objectives often without recognizable narrative structures, but unique architectures of meaning purely personal to the filmmakers themselves. I think the critical generation or generations might expand our film language in context to each new example by necessity and a cogency within the critic's imagination, not merely relying upon textual skills of insight, but demanding a more full lexicography which cameras and technique, even at their most rudimentary expression, can openly utilize and sustain.

I'll be working on my review of The House as soon as I get my Bolex out of the shop. Please feel free to follow suit.

Philippine New Wave: This Is Not a Film…