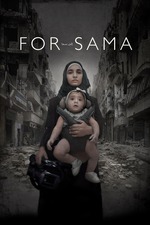 For Sama revolves around a woman who insists on remaining in a besieged opposition enclave in Aleppo. It takes place mostly in claustrophobic trauma wards where doctors struggle to save the victims of the Assad regime’s bombing campaign.

The film is raw and painful to watch, with war-time camera work, presenting a tsunami of images that numb our senses and obscure rather than clarify a complex war with many sides. It also seems to have the same structure commonly used in Hollywood films. There are "heroically good" and "irredeemably bad" guys, but there aren't any "rebel fighters" in the film. Al-Kateab complains in passing about religious extremism, but the film shows little evidence of it apart from women in black veils.

The films’ principal theme is the large-scale bombing of civilian areas by both the Assad regime and its Russian ally, presenting an extremely partial and narrow window onto Syria’s suffering. It's not a parable about the war’s political meaning. It lacks the broader context. Context is everything.

The film suggests a natural progression from the first peaceful protesters of 2011 to the last stand of that city’s eastern enclave under the Assad regime’s bombs in late 2016. That's not what really happened. Peaceful protests against the government that began in 2011 were quickly overtaken by Wahhabi jihadist groups like al-Qaeda (al-Nusra) who were funded and supported by Saudi Arabia, Turkey, Qatar, the United States, and others. They exploited the peaceful protesters, occupied their communities, and killed and tortured Syrians who would not cooperate with them in their fight to overthrow the government.

Most of Aleppo did not want the revolution. When other Syrian cities erupted in revolt in 2011, Aleppo stayed quiet. It was a commercial town, celebrated for its maze of medieval markets, and most local people seemed unwilling to risk a bloody confrontation with the regime. The revolt was imposed from outside in 2012, when an Islamist group from the countryside called Liwa al-Tawhid took much of the city by storm.

Saudi Arabia, Qatar, and Turkey, and the CIA shipped thousands of rifles, hundreds of machine guns, and large amounts of ammunition to so called Syrian "rebels" in 2012. Shortly after that, the operation Timber Sycamore was launched — a classified weapons supply and training program run by the CIA and supported by some Arab intelligence services, which supplied money, weaponry and training to "rebel" forces fighting Syrian President Bashar al-Assad in the Syrian Civil War. Many of the weapons were purchased in the Balkans or other locations in Eastern Europe, and then routed to Syrian rebel forces and training camps by Jordanian security services. CIA paramilitary operatives trained Syrian "rebels" in use of the weaponry. At least 50 vetted "rebel" groups fighting in Syria that received weapons or training through the program after late 2012; the exact number is not known. The program also pumped many hundreds of millions of dollars to many dozens of militia groups.

The film doesn't show any of the militias fighting for “free Aleppo”, whose members tortured prisoners not far from where al-Kateab and her husband were recording their daily lives as civilians caught up in the conflict. She lived in an area that was defended by brutal Islamist gangs. Whatever one may think or feel about al-Kateab and her husband, Aleppo was not a free or just place under the rebels. The so called "rebels" — many of them jihadists — hoarded food while civilians starved, murdered those suspected of disloyalty, and waged internecine gun battles in the streets. There is no significant difference between the "rebel groups" in Syria and al-Qaeda (al-Nusra) or ISIS — they are all basically the same. This is a war between terrorists under the command of groups like ISIS and al-Qaeda and the brutal Syrian government.

A New York Times article onfirmed that "rebel groups" supported by the U.S. "entered into battlefield alliances with the affiliate of al-Qaeda in Syria, formerly known as al Nusra." This alliance rendered the phrase ‘moderate rebels’ meaningless.
— www.nytimes.com/2016/11/12/world/middleeast/donald-trump-syria.html

Reports confirm that "every armed anti-Assad organization unit in those provinces [of Idlib and Aleppo] was engaged in a military structure controlled by [al-Qaeda’s] Nusra militants."
— consortiumnews.com/2016/10/22/washingtons-new-lock-step-march-of-folly

The CIA for a long time supported a group called Fursan al Haqq, providing them with salaries, weapons and support, including surface to air missiles. This group cooperated with and fighted alongside an al-Qaeda affiliated group trying to overthrow the Syrian government.
— www.latimes.com/world/middleeast/la-fg-cia-pentagon-isis-20160327-story.html

The Levant Front was another so-called moderate umbrella group of Syrian opposition fighters. The U.S. worked with Turkey to give this group intelligence support and other forms of military assistance. This group joined forces with al-Qaeda’s offshoot group in Syria.
— carnegie-mec.org/diwan/57605?lang=en

"Hammeh and Qudsaya were held initially by the FSA — in Hammeh the rebel forces included some fighters affiliated with Syria’s Al Qaeda affiliate, Jabhat al Nusra. During ceasefires in Qudsaya, fighters from Hammeh would often spoil the truce by launching attacks on government areas. This infuriated the government and the residents of Qudsaya and Hammeh. Ultimately the siege tactics imposed by the government on these areas worked. Nobody was forced to leave, they were given the choice of either remaining in the Syria of President Assad or leaving to insurgent-held areas in the north.
An estimated 300 insurgents, some 30 percent of the rebel fighters in Hammeh, as well as some of the civilian elements of the insurgency political administration, chose to stay and receive amnesty from the Syrian government in exchange for handing over their weapons. For those who stayed, checkpoints were removed and life was normalized, including for the men who were given amnesties.
(...)
What was most striking during my visit to Hammeh was the ratio of schools to mosques. I lost count of the number of mosques after I reached six. I asked Ebrahim how many schools were in Hammeh. He said five, but that includes just one high school. This was a noticeable pattern in areas of Syria that fell to the opposition — the mosques seemed to exceed the number of schools.
After 2000, when Bashar al Assad took over the presidency following his father’s death, he relaxed some of the country’s anti-religious laws and thousands of new mosques were built. A senior official with the ministry of public record estimated that 10,000 mosques were built under Bashar. This number does not include the Koran memorization schools the government sponsored during this time. Many of these mosques were funded by private donors from outside the country, mostly from Gulf states like Saudi Arabia and Kuwait."
— thegrayzone.com/2018/08/02/meet-the-mystery-fixer-who-negotiated-syria-out-of-seven-years-of-war

From Iraq to Libya and Syria, the U.S. has waged wars of regime change, each resulting in unimaginable suffering, devastating loss of life, and the strengthening of groups like al-Qaeda and ISIS. The U.S., working with Saudi Arabia and Turkey, fueled the brutal civil war that has caused the deaths of over 400,000 Syrians and millions of refugees. If this war was successful and the Assad government was overthrown, the strongest force that would have taken over Syria was ISIS and al-Qaeda. This would have resulted in a far worse humanitarian and refugee crisis, a genocide against religious minorities, secularists, atheists, LGBT, and any who did not prescribe to their specific extreme ideology, and would have presented an even greater security threat to the region and the world.

Although opposed to the Assad government, the political opposition adamantly rejects the use of violence to bring about reforms. They argue that if the Wahhabi jihadists, fueled by foreign governments, are successful in overthrowing the Syrian state, it would destroy Syria and its long history of a secular, pluralist society where people of all religions have lived peacefully side by side. Although this political opposition continues to seek reforms, they are adamant that as long as foreign governments wage a proxy regime change war against Syria using jihadist terrorist groups, they will stand with the Syrian state as they work peacefully toward a stronger Syria for all Syrians. The people of Syria desperately want to live in peace & do not want their country to be taken over by genocidal terrorist groups like al-Qaeda and ISIS.

For Sama flatters the belief that what happened in Syria is a stain on the Western conscience and that it was a result of the failure to intervene decisively. When in fact, America and many other Western countries were far too involved in what happened in Syria, and the foreign guns and money only prolonged the country’s suffering.

Overall, For Sama provides only glimpses of a devastating war and lacks the brutal honesty and the broader context necessary for it to add anything helpful or important to the collective picture of the Syrian catastrophe, in which no side has a claim to righteousness.

More than half of the stringers used by Al Jazeera in Syria were trained in a joint US-UK government program called Basma, which produced hundreds of Syrian opposition media activists.

Western government PR firms not only influenced the way the media covered Syria, but as the leaked documents reveal, they produced their own propagandistic pseudo-news for broadcast on major TV networks in the Middle East, including BBC Arabic, Al Jazeera, Al Arabiya, and Orient TV.

These UK-funded firms functioned as full-time PR flacks for the extremist-dominated Syrian armed opposition. One contractor, called InCoStrat, said it was in constant contact with a network of more than 1,600 international journalists and “influencers,” and used them to push pro-opposition talking points.

Virtually every major Western corporate media outlet was influenced by the UK government-funded disinformation campaign exposed in the trove of leaked documents, from the New York Times to the Washington Post, CNN to The Guardian, the BBC to Buzzfeed."