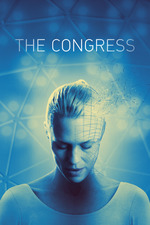 Highs: A highly imaginative film for sure. The animation is unique and unlike anything I've seen. It resembles Waltz with Bashir in a way, but here we enter in a fantastic world filled with strange and colorful characters / backgrounds. The Congress contained plenty of interesting and, at times, hilarious cameos by celebrities, religious icons, historical figures and so forth. I was also impressed by how much drama there was in this film. Robin Wright portrays this decadent actress who accepts one last job that will change the rest of her life. I liked how the animated world connected with reality for the most part.

Lows: The animation is often spectacular, but can be too cartoonish on certain occasions, not being for everyone. This futuristic view of the movie industry is really over the top, but this wasn't a huge deal for me as it's mainly a sci-fi film. There are a few silly dialogues and jokes that dragged the first half a bit.

Verdict: The Congress is a great comeback from Ari Folman and is definitely the wildest trip I've had watching an animated film in a long time.