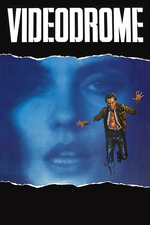 It's easy to run out of adjectives describing a film like Videodrome, a pulpy, prescient, innovative game-changer that pushed boundaries in special effects and, some might argue, good taste. It's a cross-pollination of sci-fi, satire, horror, lust, perception, addiction, media, and message, exemplifying them as struggles both internal and external, and occasionally both. That a plot at once cohesive and interpretive emerges from this is an achievement on par with threading fiber-optic cable through 6,000 needles in four dimensions to have the mess resolve as an inscrutable Rubik's Cube.

Nevertheless, it cannot be overstated that Videodrome's surging philosophical content computes effortlessly; while you're dazzled by images of perverse sexuality, violence, and gore that still emerge as transgressive, David Cronenberg hijacks these genre trappings to express ideas about technology and the human condition, reflecting a sort of Möbius-like recursion in the plot itself. Cronenberg's skill at conceptualizing the phantasmagoric in visceral images ascends Videodrome to an echelon striven for with such infrequency that the singular auteur is the first, last, and only person with whom it can be identified.

This film introduced me to the Criterion Collection when I was a burgeoning film addict and a special features-junkie who had recently identified Cronenberg as a director upon whose work I could get drunk. Knowing very little about it, I bought the set at TLA Video in Bryn Mawr and screened it that night in a Temple University common room, much to the alarm of the staff. I didn't previously realize my sci-fi/horror films needed substance behind all that violence, sex, imagination and catharsis, but with heaps of inventive carnage and biting technophobic stricture, Videodrome cleared that up, making my number one... with a cancer bullet.