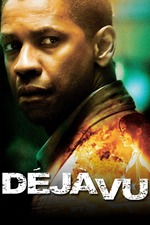 "What if you had to tell someone the most important thing in the world, but you knew they'd never believe you?"

Hugely empathetic and perhaps one of the most romantic films ever made. The script resembles something Christopher Nolan would make a mess of, but Scott's kinetic and lively brand of cinema filtered through screen after screen elevates this beyond stoic procedural and finally into a touching love story that spans dimensions. Some viewers may find the first act to be a bit of a slog and understandably so for a film so full of exposition - once again another reason to be thankful Nolan didn't direct this as he is a man who excels at selling dialogue free of subtlety - but instead is anchored by an always expressive Denzel Washington who expertly navigates the procedural elements and commands every frame. The level of professionalism on display from his characterisation is something akin to Mann's protagonists. It's also worth pointing out that people sitting and standing around talking in front of screens has never been filmed with such potency and engagement.

Once we get to the time travel and the surveillance room, boy does this kick into overdrive. Initially utterly horrifying due to how quickly it spirals into Peeping Tom territory, Scott uses the Snow White program to interrogate and start a dialogue on the connection between humans and technology, with the technology eventually functioning as a bridge to bring two very lonely people together in union facing the threat of an angry white male terrorist giving arguments for the tree of liberty to be refreshed from time to time with the blood of patriots and tyrants. Love conquers physics and death.