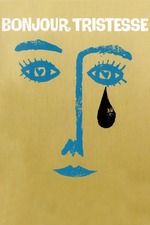 A moralist is brought low through social intercourse with a dissolute father and daughter combo.

Otto Preminger's Bonjour Tristesse is an intriguing (if overly sanitized) vision of the dysfunction wrought by Freudian sexual urges. Cecile (19-year-old Jean Seberg in her second film role) has a raging Elektra complex for her rake father (Raymond, a devilishly fun David Niven) which they conspire not to acknowledge via a ceaseless series of casual affairs on the French Riviera. Turbulence ensues when Raymond has his head turned by a former flame with serious intentions. As said flame the incomparable Deborah Kerr is sadly forced into a stuffy, priggish role.

The film is lovely to look at (elegantly photographed by Georges Perinal), but it's far too tidy for the perversity of its underlying themes. Furthermore it's addled by hand-holding narration as though it were made for children. Most importantly, the young Seberg is just not much of an actor here. Withal I'm glad the film exists not only because it's beautiful and mildly entertaining but also because Godard intimated that Seberg's role in Breathless is a direct continuation of Cecile.

I need more Martita Hunt in my life.

Some stray notes:
-ANY ZIPPING OR BUTTONING TO DO?
-ACTRESS, ASPIRING--RATHER APPETIZING
-ALBERTINE HAS THE SUNSTROKE
-LET'S SMELL THE DAY
-THE LOBSTER LADY APPROACHES
-CECILE & PHILIPPE ON BEACH VISUALLY QUOTING KERR & LANCASTER IN FROM HERE TO ETERNITY
-SLIGHT MAID PROBLEM
-AND YOU DON'T NEED A DIPLOMA FOR THAT
-MY HOROSCOPE KNOWS MORE THAN YOUR LAW BOOKS
-I FOUND A NEW GAME AND IT ENCHANTS MY BLOOD!
-TO LIVE YOU MUST BE DRUNK ON SOMETHING
-A MEAN LITTLE MONSTER
-ANNE GETS 4 OUT OF 100 FOR FUN
-THAT SCHEMING ADVENTURESS
-ON THE BRINK OF A TANTALIZING ABYSS
-AN ABSOLUTE MONSTER CAD
-MADAME PASCAL SPINOZA
-THERE'S NO LIMIT ON BORES