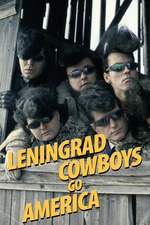 "You always get murdered when you go to New York."

My first brush with the Leningrad Cowboys (née the Sleepy Sleepers) doubles as my introduction to Finnish auteur Aki Kaurismäki in the form of the 1989 road classic Leningrad Cowboys Go America. The film was conceived and co-written by Kaurismäki and Cowboys Sakke Järvenpää and Mato Valtonen.

Spurned by an unmoved A&R man in their native Siberia, the motley titular band (distinguished by their unicorn pompadours and exaggerated winklepicker boots) are cynically advised to head stateside, "Go to America; they'll buy anything." In practically no time the outré performers—along with their monocratic manager Vladimir (Kaurismäki regular Matti Pellonpää), the corpse of their former bassist and the village idiot who has boarded the plane as a stowaway and will blunderingly track the group throughout the film—land in the Big Apple and head straight for CBGB's, where they are again unceremoniously rebuffed, though this time at least with the trifling handout of a wedding gig requiring further international travel, "You know Mexico? Go there."

Moments later the band is buying a Cadillac from Jim Jarmusch (clearly a seminal influence on Kaurismäki's vision of America) before hitting the proverbial open road—though what they actually hit is a monotonous, postindustrial wasteland full of moribund dive bars and rusted-out factory works. There are hardly any indications of the passage of time or geographical space aside from the preposterous accumulation of Vladimir's empty beer cans, which he recurrently whips backward into the impassive face of an anonymous Cowboy. Whatever minuscule conflict exists within the film centers on the Cowboys' collective effort to unburden themselves of Vladimir's pitiless yoke.

Even to call the plot low-key would still feel like something of an overstatement. Only Vladimir is individuated in any way, and even he is rendered in cartoonishly broad strokes. His abuses and the general deprivation of the band are played exclusively for laughs. Logical problems are whisked away by a dingy brand of deadpan magical realism, which doesn't begin to enable the fruition of the so-called American Dream but rather intervenes precisely enough to forestall imminent calamity (while also conveniently eradicating continuity issues that would otherwise plague the film). In short, Leningrad Cowboys Go America is the bewitchingly droll human trafficking farce I never knew I needed.

Some stray notes:
-SPINGLISH—I MEAN SPEAK ENGLISH
-MORRISSEY POSTCARD ON PROMINENT DISPLAY AT RECORD RON'S
-YOU COULD DRIVE THAT CAR THROUGH WORLD WAR THREE AND COME BACK AGAIN
-RED SATIN JACKET WITH HAMMER AND SICKLE
-WHAT A LOAD OF SHIT
-THEY BEAT HIM BADLY