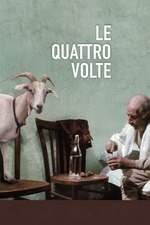 This isn't a film you should see if you demand that films have a dense plot, exciting dialogue, thrilling suspense and so on. This is a nearly wordless film (there's certainly no dialogue) and almost nothing of great note happens. And yet it is a really beautiful film.

We observe (I use that word deliberately) a community in Calabria with the focus in each quarter of the film on a slightly different thing. First we follow an elderly goatherd and his flock as they move up and down the mountain for grazing. Then we see a lost kid (of the goat, not human variety) that has got separated from his flock. In the third, the villagers cut down an immense pine tree and haul it back to the village for some kind of tree climbing competition. Finally, the remains of the tree are cut up and we follow the activity of the charcoal burners.

We often get an almost aerial view of the action, seeing the winding streets of the village from above, and acting as a kind of detached, god-like observer of the people, goats and dog moving around within it. It's an extremely contemplative film, and tiny events (like an ant crawling on the face of the shepherd) are shown with great clarity and simplicity.

The other wonderful thing about this film is the sound. You need to see it in a cinema with a good system, or make sure that you connect up a good amp and speakers at home, because the soundscapes are incredible. The sound of the wind thrumming over the mountains (whistling at times and booming at others) pervades the whole thing, as do the bells of the goats, bird song and even the little pops and cracks made by the cooling charcoal sticks. It's mesmerising and rather frightened our cat!