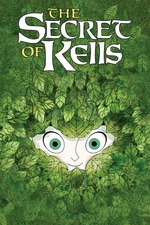 The Secret of Kells

Along with Grave of the Fireflies, I think this has to be the most beautiful animated film I've seen. I was entranced and stunned by the sheer style of it the whole way through. The story is based around the creation of the Book of Kells - an illuminated Gospel produced around 800 AD, but weaves in elements of Celtic mythology. The hero - a young monk called Brendan - lives in the monastery of Kells, where his Uncle is trying to fortify the walls to withstand the advance of the 'Northmen' (Vikings). Brendan becomes fascinated by illumination when Brother Aidan arrives from Iona with the partially completed manuscript that will become the Book of Kells.

Aidan goes on a quest into the forest to find oak galls from which to make green ink, and encounters a wood spirit called Aisling. Aisling appears as a mischievous young girl, but she can also change into a white wolf, and is initially unwelcoming towards the young boy trespassing in her domain. Brendan becomes obsessed with completing the book, and ends up protecting it (together with Aidan) when the Northmen attack the monastery.

The scenes in the forest are among my favourite in the film, though I would be hard-pressed to find a single frame that didn't astonish me with its beauty. The style is unusual and uses the swirls, spirals and knots from the Book of Kells itself. In some ways the animation has a very 'flat' style (again, like the illuminations), but the use of colour and movement gives it an intensely vibrant life. There's a wonderful scene where Brendan and Aisling are climbing a gigantic oak (which has Celtic spirals and whorls embedded in its bark), that is so full of stylised detail and movement and dizzying, swirling movement that it quite takes your breath away. The dream sequences are also gorgeous and full of imaginative touches, with floating organic shapes which might be snowflakes, diatoms or decorative flourishes from the Book of Kells.

The characterisation is also wonderful. All of the characters have different body shapes and styles of movement, from the towering Abbot who is shaped like a Gothic arch, to Aisling who the embodiment of a wave or the wind. Brother Aidan also has a lovely white cat called Pangur Ban who plays an important role in the film. He is also stylised, but somehow retains the essence of cat in his sweeping, slinking movement. The Northmen are huge, rectangular, intimidating monsters, as the Vikings would probably have seemed to those under attack during their raids.

I don't think it's posting a spoiler to say that in the last few scenes of the film, we see pages from the actual Book of Kells. Brendan shows the book to his aging Uncle, and as he does so, the decorative elements move and take on lives of their own. It is utterly stunning and actually brought a lump to my throat because it was so beautiful. Legends say that the Book of Kells can turn darkness into light (real illumination!), and that's certainly what happens in this film. I'm definitely going to watch this again, if only to wallow in the gorgeous images and take in more of the detail.