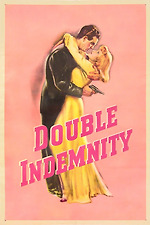 In honour of this auspicious occasion, I am lucky to take a look at this prototype of that dark Los Angeles of noir.

(I also promise this will be shorter than my BR:2049 review.)

Even from the opening the dark shadow of a man on crutches stumbling towards us (Who is he? turns out to be a very intriguing question) we are given a real clue as to the kind of dark and stormy story we are about to witness.

Miklós Rózsa contributed a very dramatic musical score that works quite well taking the emotional temperature of the action. (One Easter egg here is the scene with Neff and Lola in the hills above the Hollywood Bowl. With the iconic music venue in the background, we get the strains of the “Unfinished Symphony” of Schubert. The music is quite suitably yearning and tense.)

With a script by Wilder himself and Raymond Chandler the script is of course cleverly plotted. We have lovey moments of suspense throughout and as the screw is turned, it is never done too quickly; there is always seemingly just enough wiggle room to get out of trouble (or into more)

“There’s a speed limit in this state, Mr. Neff.”

Even with telling us the ending first, Wilder is able to keep the atmosphere tense.

The dialogue is stylised but not overly so, these characters don’t know they are in a film noir. Wilder doesn’t rely on genre conventions as audience expectations because he is sort of inventing them.

Stanwyck gets all the plaudits and she is great. We believe her both when she says her motive is a terrible husband and again when she confesses to having been a villain all along.  Even the strange declaration of love, right at the metaphorical scaffold, seems to have real meaning. We don’t get any time really to consider that, however, because by this time Neff’s own emotion is hollowed out.

“We are hitting it for the limit baby, that’s why it has got to be the train.”

MacMurray also does well as the man caught in his own web. Remember he has to embody someone clever enough to think up the perfect murder but also be totally off the pace when thinking of Phyllis.

As one of the other reviews said, a recurring theme here is being unable to see the snake because it is too close to you. Neff with Phyllis, and of course Keyes with Neff. (We are teased with Lola and Nino as well.) Only Phyllis is clear-eyed through and through.

Robinson as Keyes is played for laughs occasionally (there are fair number of jokes in the movie in general) but he plays a key role both plot wise as the dogged investigator who doesn’t stop until he has uncovered the truth, as well as being possibly Neff’s only real friend.

“There is a feeling that just because a man has a large office he must be an idiot.”

Speaking of movements of the plot, Lola is a great wrench to throw into the action. She is character whose relationship with the other characters is delightfully ambiguous. (Whose side will she be on?) The shady past knowledge she apparently has is a great bomb waiting to go off. (Unless it is a fake bomb?)

Which female Dietrichson is Neff loyal to? I assume the Hollywood code made sure that element is never referred to openly. Also, it is a pity there wasn’t any physical sensual connection between Phyllis and Neff, which would have sold their connection a bit more than displayed here. (Nevertheless the movie is more sexy than any 1944 movie might be expected to be)

Neff is our quasi Everyman and the patsy, but don’t forget he murders two people. We see things from his perspective but Phyllis was astute to pick him. One intriguing aspect of the movie is that Neff was only a few steps away from murder even as he drove that car in to the Hollywood hills to see Mr. Dietrichson. It wasn’t just the smell of honeysuckle that made him do it. Feminine charms and fancy anklet are only part of the reason. Another Part of the reason he does it is to prove he could. He is an insurance guy, he knows all the tricks. He thinks of himself as a smart guy. He is a worthy man for any woman, he thinks. He is single by choice. It isn’t hard to believe he thinks he is superior to the women he’s been with in the past, and thinks settling down is for suckers.

“Walter, you’re all washed up”

We don’t end with an action scene or with multiple gun shots, just an relaxed conversation among old friends. And like old friends they don’t need to explicitly mention the context of the conversation or much of the outside details, after all Keyes has been standing at the door long enough.
Neff may be bleeding out, but his eyes are seeing clearly for once, and the heavy weight of where his choices have left him is becoming apparent. The movie is not about action, but about choices and the consequences of emotions. Wilder wants us to follow Neff’s emotional journey, and that is why we have the depressing and almost uncinematic final moments.