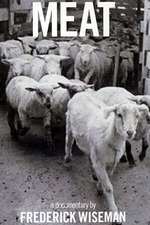 Back to the old school documentaries....

These movies by Wiseman seem to illustrate Dan Rather's old phrase, "The Camera never blinks" and Wiseman certainly doesn't flinch here from showing the process of meat production with all the blood, viscera, and knives and saws involved in it. As in his other films, he doesn't hype anything, and makes no accusations or conclusions about what he is showing us. While we do see some cowboys and cattle on the range at the beginning, and burger patties being boxed on an assembly line at the end, we still are treated to Wiseman's trademark kaleidoscope approach. The factory floor is just one of our destinations here.

After all the subtitle " A look at the production of consumer meat products" gives us a clue as to what he is going for.
We have the auctioneer patter of a cattle auction. We have office business strategy meetings. We have salesman doing their "Glengary Glen Ross" Routine. We have the Governor (?) glad-handing in the cafeteria. We even have union negotiation, and musing on the future of beef depending on the world economic situation and the cost of grain. (If the USA exports too much grain, his theory goes, the cost of feed will go up high enough to result in beef becoming more of a luxury item.)

Of course as with his other films, we need some odd witty moments thrown in, as in when some Japanese businessmen on a tour visit the plant. One of the American employees is trying to explain the setup to their translator. The result is charming but awkward.

And we seemingly can not have a Wiseman film with out some cleaners pushing brooms around. Interestingly, this occurs right after the most graphic part of the film, the sequence where the cattle are brought in and slaughtered and processed. (The PETA section of the film, although their version would have crazy music and apocalyptic voiceover.)
There is basically no dialogue here, just the hum of the machinery (the employees mostly wear ear protection) If the audience was keyed up by that scene, we have another, in a quiet dark factory, where people are sweeping up, and putting things back to order.

We take many things for granted in our consumer society, just assuming that somebody smart is taking care of it; as long as I can go to the store for burgers for my barbecue at a reasonable price, everything must be fine. Kids in trouble with the law? I'm sure the juvenile court can solve that. Wiseman takes these unseen but vital processes that underly our way of life and really shows us what they are really like.