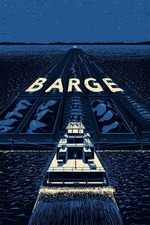 *originally posted on Next Projection*

Documentaries can be a tricky pony to lasso, but the assured vision and riveting filmmaking on display in Barge gives the impression that Ben Powell has spent many years making them when the truth of the matter is he only is credited as directing two other documentary shorts prior to this stellar 75-minute film. Tightly assembled and bursting at the seams with intrigue, Powell’s cameras capture 28 days on board a tug boat bound for New Orleans. For much of the film, Powell’s touch feels invisible. Instead of interviewing and probing, he observes. Undoubtedly there were questions and conversations off camera, but it never feels like the subjects have been placed in a traditional interview. All of the people on the boat are fascinating, and one gets a clear sense of the way this life works. It’s a truly wonderful film where not only are its subjects fleshed out, but their problems and very souls stay with you.