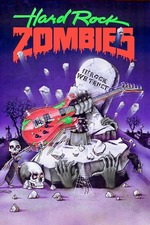 Some amusing gags were tarnished by a skeezy approach to comedy, gore, and nudity. Sometimes it lands, but not enough to scare away the exploitative-tinged scenes. They didn't seem to coral the cast enough to make sure they were all doing the same movie. Some of them were overly serious and others were lavishly comical. By about midway, the movie had overstayed its welcome.

The "hard rock" songs aren't really metal at all. They're somewhat catchy, but they played "Cassie's Song" four times in its entirety. This is a song about the lead singer having an affair with a 14-year old. (ICKY!) "I'm so in love, but you're so young..."

Oh, also, this film is edited like Bohemian Rhapsody (which won and Oscar)!