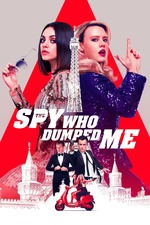 The Spy Who Dumped Me

Not bad for a comedy (my least appreciated genre). I thought the cast was likeable and had chemistry (despite many reviews to the contrary). Mila Kunis and Justin Therous are quite charming in their own right, but it's Kate McKinnon who saves the day. She totally deserves her status as a mainstream-comedy icon. She adds a lot of ridiculous to the spying and the dumping, and it works for me!

Unfortunately, the movies seems somewhat intent on including some solid action in the mix, and it was either too good for comedy, or not good enough for a spy thriller. Oh well, you can't win 'em all! In my case, I don't win most comedies, so... The Spy Who Dumped Me is a resounding fine! ;)