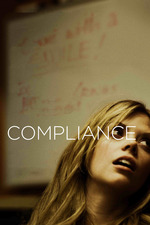 There are two reasons that Craig Zobel could have decided to make Compliance, both equally wrongheaded:

1) Zobel simply wanted to expose this case (and, by extension, the others like it) to the world, without any sort of greater message. While I don't buy this as the filmmaker's motivation for a second, some people have argued such, so I'll address it...

Put simply: text-based reporting, as had already been done extensively in this case (meaning, no further examination was really needed for mere exposure), is generally, by design, far less exploitative than film. Compliance becomes completely exploitative as it descends into sexual humiliation, especially because Zobel selectively chooses what bad things to show the audience. For instance, Dreama Walker's bare breasts are shown, but not her genitalia. If Zobel's motivations were entirely pure and he wanted to depict every detail of this case, he would have shown everything (finding an actress willing and releasing the film without a rating, which would not have really hurt its commercial prospects). But the truth is: this is a dramatization and Zobel really didn't need to show either body part, so I suspect the reason he did show Walker's breasts was a rather perverse "Because I can." Similar arguments can be made regarding the film's depiction of other gruesome details of the case.

In addition, if the goal was to depict the events simply for the horror story that they were, Zobel's aesthetic choices are tremendously inappropriate. Primarily, slick 'Scope cinematography that draws attention to its own technical mastery (annoying lack of headroom aside) is not how you shoot a film in which the characters, not the filmmaking, are the focus. Secondarily, cutting back and forth with the perverted Pat Healy gives Compliance the vibe of a Silence of the Lambs-style thriller that the audience should be enjoying for its creepiness, which is wrong on multiple levels.

2) The far more likely reason that Zobel made Compliance was because he wanted to say something broader about humanity’s unquestioning obedience to authority, referential of the Milgram Experiments. While this mode of storytelling renders many of the artistic choices above inoffensive, it produces an intellectually vacant message. As vocalized by Zobel and the actors in press, that message is effectively, “We think we wouldn’t comply to these horrible demands as we watch the movie, but if we really were in this situation, how can we be so sure? – a horrifying thought.” To which I say: No, we wouldn’t. I know I wouldn’t and, despite what he says, Zobel knows deep down that he wouldn’t. Yes, the events in Compliance happened, mostly as the film depicts them, and there were some 70 other similar incidents that didn’t go nearly as far. But these events were simply the result of enough stupid people being in one place at the right time – nothing more, nothing less. They were obedient to a veiled authority because they were stupid, not because of any universally human impulse. And sorry, there really is no valid comparison to the Milgram Experiments here, because in that context, participants had been instructed to obey by a Yale University psychologist as active subjects in an academic study, not some anonymous phone caller claiming to be a policeman. The film’s entire premise is bullshit and, as Peter Labuza writes in his review, the “true story”-origin is intended as “a shield against criticism” as much as it is a supposed real-life reflection of Zobel’s themes.

This is also where the film becomes dangerous. Most viewers won’t buy the idea that there is anything universally human about these characters’ actions. Instead, they will see them for the intellectually-challenged people that they are. But instead of seeing them as individually stupid, some viewers might view them as regionally stupid. Given that most audiences of Compliance, a prestige film made for distribution in arthouses in upper-class urban areas, couldn’t be farther from the film’s setting, I worry that some could misinterpret the film as an accurate general depiction of Midwestern life, as if a large number of people in flyover states (and specifically, poor people in flyover states) are Country Bumpkins who might have fallen for the caller’s sick demands. Now, is this Zobel’s problem any more than it’s Kathryn Bigelow’s problem that some people view Zero Dark Thirty as “pro-torture”? Perhaps not, but Zero Dark Thirty boasts a laundry-list of positive assets that negate whatever potentially dangerous effect it could have on those who misinterpret it; Compliance doesn’t boast any.

Screened at home via Blu-Ray.