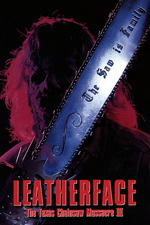 Leatherface works for me better than when I originally saw it. I still have to wonder why Viggo looks so much better than the rest of the clan. I know he's the face of the family, to lead unsuspecting foodstuffs home for making the vittles, but he could at least have a limp or something. Male pattern baldness? I don't know. He just looks too good to be living in that house.

The Flower with Petals of Steel