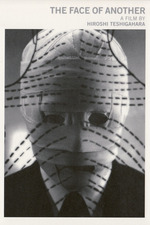 "I doubt it would succeed, but it would make an interesting experiment. It's against medical ethics, but you've twisted my arm. However, there's one condition. You must tell me everything you do from now on. I'm lending you the mask as a therapeutic tool. It's not yours to keep."

The Face of Another reminds me a bit of The Invisible Man in the way that the main character's sanity hangs on the question of how much of one's identity does one lose depending on how one's seen, or not seen, in the case of The Invisible Man. Here Okuyama's face is ruined in an accident and at first he chooses to keep it bandaged, despite his doctor's insistence that it will keep it from healing, even if it will never be the same as before. After realizing that Okuyama will never let his damaged face show, his doctor gives him a malleable mask that replicates human skin well enough that most people would never be able to tell the difference. It won't last forever, though, and no one knows for sure how long it'll remain viable.

Okuyama begins living in a new apartment separate from his wife, going to places he normally doesn't, associating with people he normally wouldn't, but keeping his doctor informed of his actions. That's when he starts getting some ideas that are a bit more outside the box of normality.

It took a good twenty minutes to really capture my attention, but once it did, The Face of Another unfolded in a way that kept me intrigued until the end. Well worth a watch...

Izzy Gets the F*ck Across Town