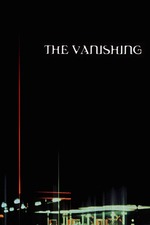 Tim Krabbé’s The Golden Egg, from which The Vanishing is adapted from, is one of the finest novella’s I've ever read. Even in its confined 114 pages, the writing is astonishing. Krabbé builds up his characters, layers them with reason, and as the story progresses allows his reader to become obsessed with how the story unfolds.

George Sluizer’s adaptation is as far from my expectations as imaginable, but I couldn’t mean that in anymore of a positive way. I went in, despite my knowledge of the story prior, expecting a tense, challenging thriller. Sluizer’s film is presented more as a character study than anything else. Three years after his girlfriend’s disappearance, Rex is still struggling to accept the worst and his personal investigations go on throughout the film. Rex, presented early in the film as somewhat of a calm, collected figure, is now nothing but. He’s chaotic and obsessed with finding the culprit and it even tears apart his new relationship he’s built since, presenting a man’s unstoppable love in the grandest of ways.

On the other side is Raymond Lemorne; the culprit. Sluizer’s film analyses him, his family and what makes him perform such a terrifying act. Bernard-Pierre Donnadieu is a revelation in the role. As we uncover his secrets and become entangled with the life of a sociopath, the performance grows even stronger. The novella, in my opinion, makes Lemorne seem somewhat of a secondary character. Sluizer’s film puts him at the forefront, and without a shadow of a doubt, the way Lemorne is handled by Sluizer is incredible. The commanding force of Donnadieu’s performance and Sluizer’s tidy, inventive characterisation make for one of the most impressive thrillers of the 1980’s.

The Vanishing pulls no punches and Sluizer’s study of a killer is one of the most uncompromising and intelligent films of its time. I would recommend people read Krabbé’s novel prior for a more effective experience, but even as a standalone film, it is brilliant.