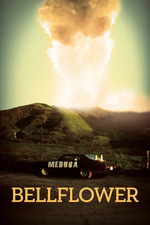 This was a film I had been meaning to see since high school. I distinctly remember seeing the trailer of the main guy driving away in the car with smoke flying and I was like “whattttttttt is this.” I later remember also hearing it described as “a John Hughes movie meets Mad Max” and “a breakup movie where after the breakup he tries to end the world” (John Waters might’ve said that?). It played at the Kendall Square Cinema but I missed it there and later got it conflated with HOLY MOTORS, resulting in my not seeing either. By the time I straightened it all out, I decided I wait to see it in a theatre and the Secret Movie Club provided that chance by doing a double feature of original ultra-low-budget debut films from filmmakers with stem backgrounds (director Evan Glodell was an engineer while director Shane Carruth of the second film on the bill, PRIMER, was a mathematician).

And first and foremost, this film absolutely earns its reputation as unlike anything else. Programmer Craig Hammill mentioned in the intro that Glodell built everything in the movie, from the crazy custom cars to the flamethrowers, and it shows in the best way possible. This is one of those movies where even though you know everyone’s all right because the movie exist, every time they do some sort of stunt or dangerous thing you’re genuinely worried they’re going to get hurt lol. So when about a half hour in when they finally finish the flamethrower and test it and it cuts to this wide shot of the main character firing it, it’s so clearly just a guy shooting an actual flamethrower that the craziness of it just hits you in this sublime way. Glodell also built his own lenses for much of the film, resulting in some shots with depth and focus literally unlike anything you’ve seen, which successfully connects the fascinating tension between the sun-drenched 16mm 70s exploitation look and very early 2010s feel from stuff like the soundtrack (fewer things more emblematic of my high school days than the Chromatics’ cover of “Running Up That Hill”).

The story gets a little messier. Much of this film is great and deals with the conflict between a love affair with women and a dual love affair with men and THE ROAD WARRIOR. Truly, the more these guys are with women, the worse their Mad Max cosplaying gets and the more they Mad Max cosplay, the worst their relationships with women get. This part I think the film mostly has a handle on and even if it ultimately gets a too “bros before hoes”, it still delivers a pretty moving mediation on the alternating comfort and self-destruction of focusing on established male friendships instead of expanding horizons to the other people around them.

More problems arise from the fact that this is perhaps the great millennial successor to the Gen X DIY debuts from the turn of last century, stuff like PI and FOLLOWING (the trailer of which played beforehand). It doesn’t go into the even more modern online strand of it, where any philosophical pretense has been stripped to literally just dudes whining, but the degree to which it is commentating on the toxic masculinity of those works and the degree to which it is participating in them is fuzzy. Glodell wrote the script after a breakup then shelved it for two years, correctly guessing the original version would be too raw and self-involves. However, the harshness of the feelings is still there and the film is basically completely derailed by an extended surreal sequence near the end that both takes the film in a completely different, and far less interesting, direction and also just really reads as sexist. I’m not saying Glodell himself is but that the tightrope of fury is not balanced on at all.

Thankfully, the film mostly rebounds in the end (woahhhhhhh boy is it cool when he finally starts ripping off in that Medusa car) and again, the originality of this thing cannot be denied. I’ll probably be flipping between 3.5 and 4 on this for a few days but if you haven’t seen it, I do think you should take time to check it out and if you can do so with it projected on film in a theatre all the better.