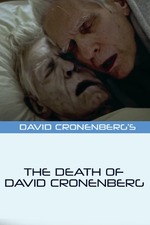 (If you just want a review of the short, skip to the second to last paragraph)

One of the most oft-refenced quotes is Marshall McLuhan’s “the medium is the message.” His book Understanding Media where he coined it was a tremendous influence on me in college and remains so to this day (*Marshall McLuhan enters my Letterboxd review to tell me I know nothing of his work*). If you’re unfamiliar with it, it basically means that the way a work is presented (“the medium”) affects the actual content of it (“the message”). An easy example is episodic TV. Even if you watch an 8 part miniseries all in one sitting, the very nature of its presentation in episodic segments shown by a broadcaster affects how it is constructed and thus what it is. Sometimes this is not particularly important but when discussing David Cronenberg’s latest short film, it would be illogical, and perhaps even immoral, to not analyze its medium: an NFT.

An NFT (Non-Fungible Token. Though that’s not my preferred expansion) is a piece of data made up of strings of blockchain that essentially identifies the object as unique. The kicker is, the object itself is not unique. For example, anyone with an internet connection can access the Flying Pop Tart Rainbow Cat gif but only a select few were able to purchase the exclusive NFTs of them. If you’re asking yourself, “well what’s the point of unique ownership of something if an exact duplicate can be accessed by anyone when there’s nothing that could allow either to literally claim to be the original?” You’re right!

NFTs themselves serve no purpose other than to work as a cryptoasset. Unlike say a tangible original of the Mona Lisa, nothing differentiates an NFT from another version of its content aside from the meaningless blockchain. Very few trade in them for art collection purposes, you may notice almost all art collectors display their collections in some form or another, some very rich folks do it as a quick investment, and most use it for money laundering. It was so plainly a fad that its bubble burst a couple months ago only shortly after first taking off and now it has been artificially re-inflated in a cycle that seems destined to repeat itself ad nauseum.

Which I wouldn’t particularly care about except for the two big problems with it. One is that it is TERRIBLE for the environment. It requires massive amount of energy, the kind that could power a small country, to create the blockchains releasing an abhorrent amount of carbon at a time when we could not be closer to the cliff’s edge of the climate crisis. Some specific blockchain insist that their NFT creation uses comparatively less energy or they offset it but carbon offsetting rarely equals the original impact and there is an obvious difference between creating NFTs and, like, planes. Commercial air travel is necessary for our society to exist but meaningless digital receipts created only to make a buck or assuage egos are not. But even if they were completely environmentally friendly, they’re still antithetical to the very spirit of art. An NFT is created solely to work on a commercial level but even the most commercial of art and entertainment works on its own merits at a certain level. Many of the artists who fall under the sway of NFTs suddenly appear like they’re being affected by the spirals of Uzumaki and it’s no coincidence a DJ who will remain nameless and made one of the better albums of the 2010s has produced basically nothing but trite since helping to kick these off.

Why in God’s name am I writing an op-ed instead of talking about this short? Because there’s not much to say about the short! It’s a minute long and features an aged Cronenberg in a robe walking over to and then cuddling a recently deceased Cronenberg. There’s a compelling look to Cronenberg’s face and an interesting muting of audio but that’s about all there is. Except for how it works in context as an NFT. Cronenberg has spent much of his career investigating and cautioning man’s attempt to expand and merge with technology and modernity, often designer. There are few better personifications of this than the absurd NFT and how it affects those interested in them. But under the persuasion of his daughter Caitlin Cronenberg, he decides to release this otherwise unremarkable short as one. And it’s about him confronting death? It’s almost a Black Mirror-esque (a show no doubt indebted to Cronenberg) twist that the man who spent decades rallying against this sort of stuff would use it in old age as a performance of death to provide a sort of immortality in the form of explicit commercialism. That’s not good but it’s interesting.

It can be streamed within the next couple hours at its digital auctioneer Superrare’s site before it’s auctioned off and removed from direct public viewing. Anyone who reads my reviews regularly knows I take watching works in the proper way very seriously and would never suggest that an exact copy of it can be seen on YouTube. Surely.