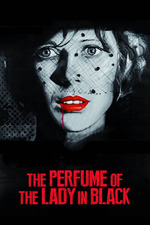 This is a giallo I only became aware of in the past year or so. But I quickly learned many of those who had seen it considered it one of the very best gialli. I made it a priority to watch it once it recently appeared on Kanopy (and Amazon to rent) after once being fairly hard to see but I held out just on the off chance it played as part of Giallo January, perhaps my favorite LA movie tradition. Incredibly, it was indeed among the selections. Programmer Jim Branscome stressed how rare this was as this print will only play one or two more times and then be destroyed because of its deteriorating condition due to vinegar syndrome. Despite this, the print remained quite beautiful because of the film’s technicolor process and most of the serious issues were contained to small sections.

And for much of the runtime of this, I was thinking it might be a top 3 giallo of all-time, right there with Sergio Martino’s ALL THE COLORS OF THE DARK and THE STRANGE VICE OF MRS. WARDH. It’s slow burn approach, and general lack of murder scenes, may turn off some straight-down-the-middle horror fans but for me the film was constantly alluring and with its lush visuals, beautiful score (composer Nicola Piovani also did the incredible music for LA VITA È BELLA), and opaque mystery create a feeling right between the waking world and the dream one. While this is certainly a giallo (J&B? Check. A random black cat hanging around? Check.), it has much more in common with the arthouse horrors of the 70s such as LET’S SCARE JESSICA TO DEATH, THE WITCH WHO CAME IN FROM THE SEA, and sort of DON’T LOOK NOW. The faded green hue of the print ironically lent itself to the film’s hazy style but I would be very interested in the Raro Video/Kino Lorber 2K restoration blu-ray to see the colors really pop.

And then the ending happens lol. Branscome mentioned this had one of the weirdest endings ever and that is indeed the case. Something happens shortly before the ending that could’ve concluded the film and while not explicitly stating everything, laid out enough clues you could figure it all out if you were paying a decent amount of attention…except for one scene. As the film continued, I thought there was going to be one of those scenes where someone explained the whole mystery but instead there was a scene that addressed that one unexplained scene with sharp and ambiguous graphic conclusion. It is truly on the level of THE CABINET OF DR. CALIGARI in terms of an out of nowhere game-changing turn and ending, though this arguably squares more with the plot. In a way it more recalls gialli director Aldo Lado and if not as explicitly political as his stuff, it does have that same general sense of critiquing Italian society. I honestly respect the audacity of it and it does make the film’s distinctly strange tone even more so but I was hoping for a cleaner landing to tie together the film’s many highs.

I still consider it one of the very best gialli (#5 or #6 in my rankings of them at first glance) and while it wouldn’t make a good entry point for those looking for something more representative of them, it would be a good stepping stone for those coming from that art house horror angle to get into the sub-genre. Certainly one that will stick in anyone’s head for a good while.