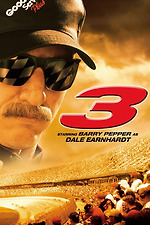 First off I am an avid NASCAR fan, I eat, breath, and dream of racing. That said this is a great movie about NASCAR legend Dale Earnhardt. This movie does so many things right to bad it couldn't be a major Hollywood production. There are a few things one could pick a part but they pale in comparison to detail of other parts. They also blend movie footage and actual race footage really well. Dale Earnhardts life has so much drama in it and so many story lines that a movie can't really do it justice and no matter what there will be things left out that you wish was in it. I wish they had spent more time on why his winning the Dayton 500 was such a big deal. I would have liked to see his last win in the movie as well because it's one of the best come from behind wins with just 5 laps left to go. Also the formation of the team he put together DEI. (Dale Earnhardt Incorporated) because it makes the last scene of the movie mean even more to the viewer. if you know that his son and Michael Waltrip were first and second and were driving for Dale Earnhardts team DEI. as Dale sr. is blocking forth place so his son and friend could win, just like in the beginning of the movie Dale Sr dad Ralph does something in the race for him. There is a lot of effort to make sure iconic moments in his life are shown and they do a good job of showing us the different cars he drove some well known and some of them might be new to the casual Earnhardt fan.

The casting in the movie is great and every one does a superb job of sounding like the person they are portraying. Some of them look a lot like the actual person like Barry Pepper looks a lot like Earnhardt then some not so much. The detail in the movie can be appreciated by NASCAR fans and the racing scenes are not cheezy and they are edited fairly well. Nothing I hate more than watching a racing movie and there is a different guy leading the race almost every camera angle, you don't get that here.