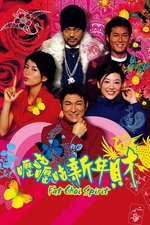 This is my first brush with a Johnnie To comedy and I say it’s just as good as his crime dramas. My initial impression though is of tepid interest because Fat Choi Spirit looks and sounds like a Wong Jing flick, a hundred times less buffoonish however. The plot’s got God of Gamblers: Mahjong Edition written all over it, which is not necessarily a bad thing but I expected more. Fortunately, a couple minutes into the story, it suddenly clicked and it’s all thanks to these wonderful characters. They’re not shallow laughingstocks; no, they’re strong, well-developed characters with feelings and individual charms, and that is what sold the film for me.

Everybody in the cast is great. Andy Lau, Mr. Hong Kong himself, is the God of Mahjong. Of course it’s customary in the genre for the hero to lose his luck halfway through just for him to climb back up top with ease. Cliched, sure, but fun. His archrival is Lau Ching-Wan, who brilliantly portrays an early 2000s hip-hop gangster-wannabe mahjong player. Andy’s love interest, played by a vivacious Gigi Leung, is a blast, as well.

Now I know very little of mahjong itself, but it did look exciting and intense in the film. The games were a bit overlong I must admit, though it gave the filmmaker the opportunity to go full auteur-mode with the editing and show off his flashy camera skills.

So Johnnie To can do comedy, who would have thought? Personally I prefer Stephen Chow’s brand of HK comedy, but Fat Choi Spirit is still fun times at the movies. It sure brightened my day. And for mahjong fans, this is definitely a must-watch.