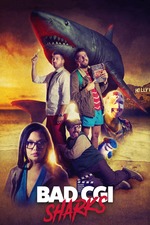 I watched a screener and talked a bit with the filmmakers via Twitter. This is a fun indie flick with a micro budget and a big concept.

How to describe this...it’ Forbidden Planet meets every Z-grade shark movie from the past 10 years. The meta, self-aware humor makes it a parody of itself and the evolving chase scenes that occasionally involve the director playing himself gives it some whimsical psychological thriller flair.

The movie suffers a bit due to the concept overwhelming the budget constraints. A few more violently gory attacks from the poorly rendered sharks would’ve really sold it. There are also some awkward and bizarre sequences that feature the director that could’ve been cut down.

Bad CGI Sharks is a solid 3 and I’d recommend it to shark monster movie fans as well as anyone who’s dabbled in After Effects or the 3d modeling arts. I also appreciate that these guys obviously had fun making it and are actively engaged with their audience on social media. Modern Indie-filmmaking done right.