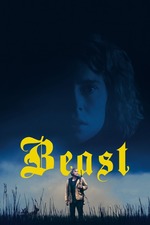 Beast is an appropriate title given how this quietly sinister effort explores the animalistic aspects of human nature that we try to suppress, the malicious side of small communities seeking to maintain a twisted order and the feeling of being hunted in your own neighbourhood as the central mystery brings to mind the real-life Beast of Jersey.

Although this type of story about an emotionally damaged person becoming entranced by an enigmatic outsider with a shady past is nothing unfamiliar, I do find the concepts it touches upon quite fascinating. It uses the experiences of main character Moll to examine the ways that unresolved estrangement, remorse and repression can lead someone to an endless cycle of self-destruction; we see how the psychological trauma caused by the subtle toxicity of her family and surroundings has warped her perceptions, hence the appeal of a man who clashes with their rigid sensibilities. Jessie Buckley impresses in the volatile lead role, capturing some intense emotions without ever falling into histrionics. The seemingly idyllic setting and warm colour palette also provide a nice contrast to the darkness lingering below the surface, evoking a feeling that some grisly truth is being concealed which creates a pervasive aura of unease.

Unfortunately, the writing starts to stumble the further we get into the narrative and the third act comes across as slightly too disjointed. Certain plot points and character progressions, especially those involving the murder mystery, feel particularly simplistic which strips away some of the complexity and emotional impact that had been built-up. This issue affects the side characters too, none of them have much depth and they end up feeling more like ideas than actual people. I'm also ambivalent on the ending sequence because it's just a bit too neat and tidy. I think the scene prior would have made for a compellingly nihilistic conclusion (escaping a monstrous family only to be trapped with a monstrous person), but instead we get something much more straightforward and I'm not sure it fits considering how much ambiguity has proceded it.

There's enough of note here to make this an engaging watch and I'm interested in seeing what Michael Pearce does next, but I definitely believe with better writing this could have been something fantastic rather than merely satisfactory.