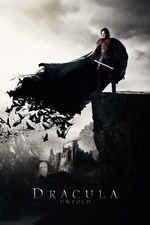 Prince Vlad has left the Turkish army, and now tries to live a peaceful life with his family and people. But the Turks are not easily discarded. They have their eyes on world domination, and they will not allow one small princedom to get in their way. Thus Vlad must make an unholy alliance, in order to keep his loved ones safe.

Watching the old Universal monster film Dracula put me in the mood of finally looking up the new Dark Universe version of the old bat (pun intended). This doesn't actually say Dark Universe anywhere, but I've heard it was intended as the first film in the new series, that after the financial and critical disaster that was Tom Cruise's The Mummy, was finally put back in the grave <i<(yes, pun intended again).
From what I remember, this got a harsh time as well back when it was released, but I never got round to seeing it then, and until now, not later either.

I must admit, I quite enjoyed this, in an easy going matiné action kind of way. It's not a film for the mind, no, but how often is that the case with monster films at all, I ask you? They're supposed to be entertaining, and I thought this was just that.
It had nice sets, cool effects, mostly entertaining action even though a lot of it was CGI. Luke Evans was engaging as Vlad, and Dominic Cooper made one hell of a bad guy as the Turkish emperor Mehmed. Heck, even seeing Charles Dance in his short role was an unexpected treat.

It is far from perfect though, especially as there are some plot holes wider than the Gorgo Pass. As in, how does that whole passing on the vampire stuff work? It seems to have different functions, depending on where we are in the story, and who does the giving.
Also, if you're set on world domination, why would you risk 10.000 trained and ready men, to collect 1.000 young boys? No wonder the Turks didn't get far in their plans after this.

Dracula Untold was clearly set up to be an origin story, seeing as how this is told back in the day, and has none of the present day aspect as Stoker's novel did.
There is a bit of a cliff-hanger at the end, and I for one would have liked to see where they wanted to take it, had they been allowed to do so. That will surely not come to pass, not in this form, but hey, there will never be a lack of Dracula stories out there.