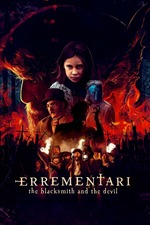 A hated and feared blacksmith lives alone outside a small country village. They say that he's a demon, and shun him, but when a government official comes to town looking for stolen gold, the villagers are quick to pick up their pitch forks and other sharp objects, to pay him a visit.
Only one young girl doubts that all is what it seems, and she has reasons of her own for not liking the wicked minded villagers.

I love horror, and I love folktales, so the folk horror genre is right up my alley. Errementari is based on a Basque folktale, and is set in the mid 19th century, so it has that magic feel of a world not yet understood or discovered, where magic and mysticism live side by side with the mundane. This is well visualized in the grey, brown, dirty, and desaturated village, contrasted to the fullest with the warm, vibrant, and hellish innards of the blacksmith workshop.
In much the same way, the people follow the look of the town, while the demons stand out in their bright colour scheme and monster design lifted straight from Botticelli and Hieronymus Bosch.

The story plays out like a fairytale more than a traditional horror, which suits the folkhorror style well. Don't expect jump scares or elaborate murders; this is more about the story, the atmosphere, the sense of wonder.
In a few places it's actually a bit silly, like a couple of slapstick style sound effects that come in unexpectedly. It takes you out of the overall feeling for a short bit, but I have to admit, I couldn't help but smile when it happened. And maybe a little bit of light isn't so bad in this otherwise very dark story?

This is the first Basque film I've ever seen, and thus I'm not familiar with any of the actors. They do a fine job of it though, and I was particularly impressed by Uma Bracaglia, who delivered big and strong emotions despite her young age, and Kandido Uranga, who was a good strong/silent type as the blacksmith, but still had us following his every emotion.
Because yes, there is a lot of emotion in this, and a lot of damaged human beings, just trying to with the evils and heartache the world throws at them - a perfect breeding ground for a deal or two with demons, wouldn't you say?

Errementari pulled me in with look in the trailer, but it held much more than that when we got down to it, and it was a very pleasant surprise. I'd love to see more in this style.