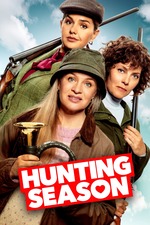 A divorced mom wants to, but can't give her son his only birthday wish, a dog.
Her friend sells dogs, and is strongly contemplating cheating on her husband.
The dad's new, young girlfriend, wants to buy the dog as well. She also helps set the friend up with a guy to cheat with.

I suppose the idea was; "Hilarity ensues!"
Well, it didn't. I believe I managed to muster a single snort of enjoyment through this entirely bewildering (see what I did there? beWILDering - Hunting Season? Yeah, I'm telling you that joke is better than what this film musters up) experience.
The main problems here, are definitely the script and the direction. The actors are all seasoned professionals, who do their best with what has been given them. Too bad what was given was a bucket of... Well, let's not go there.
Honestly, I couldn't muster an ounce of sympathy for any of the characters, because they're all portrayed as assholes, in one way or the other. And several times they must act in a completely idiotic and unbelievable way, just so that some lame joke can work. It makes no sense. And the animal cruelty part just didn't sit right with me for a second.
And I haven't even said anything about the ending yet - don't get me started on that ending!

I'll give Jagtsæson this much - it has been an interesting experience.
Not sure how good that is though, when the interesting part is this - when I walked out, I was only mildly indifferent to the film, but every time I think back on it, the more irritated with it I become! I mean, what the hell, who greenlights these sorts of things?

Roger Waters: Us + Them