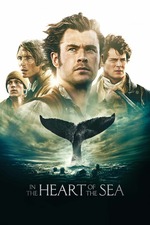 In the search of his next book, Herman Melville seeks out an old seafarer to hear of one particularly tragic voyage from the man's youth. A voyage that pitted his ship against a great, white whale, and the hardship that followed.

I, as well as basically everyone else on this Earth, know of Moby Dick of course, but I did not know of the origins of the story, which is what is told in In the Heart of the Sea, based on a book by Nathaniel Philbrick. Yeah, it get's a bit confusing - luckily though, the story itself is much more straight forward than the origins of it.

Going into this, I didn't actually know at all what the story would be. I had only seen the title, and the image of a man underwater, swimming towards a giant eye. Alright, I was hooked.
And I must say, imagery is something this film does oh so well. I mean, these beautiful old wooden ships are just stunning to behold in and of themselves, and I simply love the nautical landscape (or would that be waterscape in this case?) - and the animals! Oh my freaking god, how I love watching the animals! True, I'm guessing 100% of them are CGI creatures in this film, but they're well rendered CGI, with realistic movements, and at times, I could be lured into thinking they were real. I certainly got the wish to watch some Nature Channel or the like documentaries of whales, that's for sure.

But if there was one thing flowing through this film more than sea water, it was testosterone, and sadly I don't mean that in a good way. Ok, sure, about 99,5% of the cast was male, and it is telling a highly male oriented story, but what saddened me more than this (it's the name of the game after all, in telling this story) was the real world aspect it was portraying.
This is a world where men feels the need to go out and prove their worth by killing everything they can get their hands on, without a second thought of the impact on the world around them caused by their actions. Maybe it's just me that's completely off the mark here, but I would have liked to see some sort of empathy towards these gentle giants, that are systematically erased from the face of the planet, for something as fucking irrelevant as lamp oil - honestly, what the hell?!
Yeah, I know this is what happened in the world, and in parts of it still does happen, but that only makes it worse! And again, it's no reason for the film to condone the fact, or as it does here, simply not adress the problem. I mean, this is a 2015 film after all, and a bit of social commentary would have been nice. In the Heart of the Sea is completely cleansed from that though, and that pulls it down from the possibility of a much higher grade.

Even so, it is a thrilling tale, and Ron Howard knows how to make a big budget film look spectacular and invite his audience in for a wild ride, which is exactly what he does here.
I just feel this could have been so much more, had a bit more effort been put into it, and had it had a tad more focus on other things than men showing off their manliness.