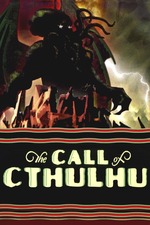 The Call of Cthulhu

If anyone would be able to properly get a H.P. Lovecraft story translated to the silver screen, it would of course be the H.P. Lovecraft Historical Society.
Having worked for so long with his stories in different ways such as role-playing, music making, radio drama and more, no other group of people could have a better foundation to build upon than these guys, led by Andrew Leman and Sean Branney.

Taking the story back to when it was originally published, and creating the film as though it would have been done at that time is a great idea - the black and white pictures are beautiful for the most part, the music by Troy Sterling Nies is breathtaking, and the attention to detail is superb (as always from these guys). Text screens and clips are varied enough to not give a repetitive feeling, and they often work together with the feeling of the film at the given point. It's not a long film, ticking in at just below 50 minutes, but that's ok because they have managed to keep a good flow and tempo throughout, and there isn't a dull moment in it.
Not all things work of course, some images where the actors have been projected onto a miniature aren't perfectly put together and it's a bit too obvious that trick photography is done, but for the most part this film delivers on all counts.

If you are a Lovecraft fan like me, or just into horror that's not your garden variety Hollywood production, do yourself a favour and check this film out, it deserves it, and so do you!