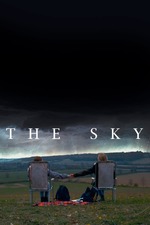 Two friends are chilling with wine and mushrooms, just watching the world end.

An ultimate disaster movie, which doesn't focus on things blowing up? Sure, why not!
The Sky is a short sci-fi film, in which the world seems to be ending, shown by a storm creeping closer and closer from the horizon, but the focus is the two friends who've decided to spend the last minutes together, holding each other company as there seems to be no one else for them. But is it really so?

It's hard to write much about this, as it really is quite short, 10-11 minutes in all, but it has a nice atmosphere, and while I found the mushroom trippiness a bit too much (as in, not exactly sure what good it did to have it there), the story developing between the two friends was sweet, and a bit heart breaking.

Cool film, which can be found on the director's YouTube channel. Worth spending the short time it takes to go through it.