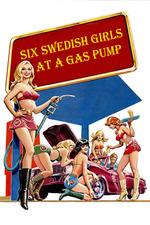 Six Swedish Girls at a Pump

An entry in Erwin C. Dietrich’s Six Swedes series, High Test Girls (commonly known as Six Swedes At a Pump) follows a band of Swedish gals as the operate a gas station in a small European village. While the girls aren’t very popular with the village’s mayor, they are a hit with the rest of the male population.

Dietrich’s series is sort of like a smutty, Swedish Bowery Boys except instead of Leo Gorcey we get Brigitte Lahaie. The film’s major downfall is that it just isn’t funny. The Swedes are indeed very attractive but they are given nothing to do and have absolutely no character. The gals are so interchangeable it makes it hard for the viewer to keep interest in the film. That said, the film was nicely shot and had a great score with an amazing Giorgio Moroder influenced music cue. The version I watched had a dubbed English track, for some reason the mayor had a Droopy Dog voice.