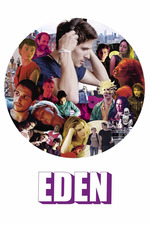 I really don't know why, but I had great expectations on Hansen-Love's Eden; a film covering the history of the electronic garage music that was the predecessor of modern house music.

The greatest flaw, and inevitably the biggest reason why it failed to live up to my expectations, is the fragmentary feeling that comes as a direct result of the fact that it is built (much like Boyhood) on short segments covering a short time, then moving on two years, repeat, repeat. The main character feels static throughout the film (he even regresses behaviourally towards the end of the film) and I fail to see how his constant abandonment of girlfriends supports the story (even though it is realistic that someone has four girlfriends over the course of twenty years).

The story is filled with characters that I never get to know intimately. They only discuss shallow things and the dramatic event that actually take place doesn't add to the story either.

All in all Eden was still not a complete waste of time and the research made before shooting it, added some kind of educational value. However, it did not make me want to see any of the other films made by director Hansen-Love