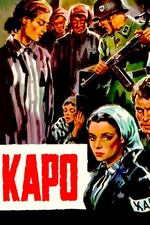 The least that one can say is that it's difficult, when one takes on a film on such a subject (the concentration camps), not to ask oneself certain preliminary questions; yet everything happens as though, due to incoherence, inanity, or cowardice, Pontecorvo resolutely neglected to ask them.

For example, that of realism: for so many reasons, all quite easy to understand, total realism -- or what serves as realism in cinema -- is impossible here; every effort in this direction is necessarily unachieved (that is immoral), every attempt at reenactment or pathetic and grotesque make-up, every traditional approach to "spectacle" partakes in voyeurism and pornography. The director is bound to make it tasteless, so that that which he dares present as "reality" is physically tolerable for the viewer, who can't help but conclude, maybe unconsciously, that, of course, it was troublesome (those Germans, what savages!), but ultimately not intolerable, and that if one were just wise enough, with a bit of cunning or patience, one ought to have been able to get away with it. At the same time everyone unknowingly becomes accustomed to the horror, which little by little is accepted by morality, and will quickly become part of the mental landscape of modern man; who, the next time, will be able to be surprised or irritated at that which will in effect have ceased to be shocking?

It's here that one understands that the force of Night and Fog came less from records than from montage, from the art with which the brute, real facts (alas!) were offered to our gaze, in a restless movement that is precisely that of a lucid consciousness, somewhat impersonal, that is unable to accept or understand or admit this phenomenon. One could see more monstrous records elsewhere than those retained by Resnais; but what isn't man able to accustom himself to? Yet you cannot accustom yourself to Night and Fog; the point is that the filmmaker judges that which he shows, and is judged by the way in which he shows it.

Another thing: a phrase of Moullet's has been constantly cited, left and right, and usually foolishly enough: morality is a matter of tracking shot (or the Godard's version: tracking shots are a matter of morality); one has wanted to see in it the height of formalism, so that one could criticize its "terrorist" excess (to reclaim Paulhanien terminology). Look, however, in Kapo, at the shot where Riva kills herself by throwing herself on an electric barbed-wire fence; the man who decides, at that moment, to have a dolly in to tilt up at the body, while taking care to precisely note the hand raised in the angle of its final framing -- this man deserves nothing but the most profound contempt. For several months, people have been breaking our balls over false problems of form and content, of realism and fantasy, of script and mise en scène, of the free actor or the regulated actor, and other dichotomies; let us say that it is possible that all subjects are born free and equal by law; that which counts is tone, or emphasis, nuance, as one will call it -- that is to say, the point of view of a man, the auteur, badly needed, and the attitude that this man takes in relation to that which he films, and therefore in relation to the world and to everything: that which can be expressed by a choice in situations, in the construction of the storyline, in the dialogue, in the play of actors, or in the pure and simple technique, "indifferently but as much". There are things that should not be addressed except in the throes of fear and trembling; death is one of them, without a doubt; and how, at the moment of filming something so mysterious, could one not feel like an imposter? It would be better in any case to ask oneself the question, and to include the interrogation, in some way, in what is being filmed; but doubt is surely that which Pontecorvo and his ilk lack most.

To make a film is to show certain things, that is at the same time, and by the same mechanism, to show them with a certain bias; these two acts being thoroughly bound together. Just as one can't have absolute mise en scène, for there is no mise en scène in the absolute, cinema will never be a language: the relationship between sign and signifier has no recourse here, and only accomplishes the similarly sad heresies of the little Zazie. Every approach to the cinematographic act that proceeds by substituting addition in the place of synthesis, analysis in the place of unity, immediately sends us back to a rhetoric of images that has nothing more to do with the cinematographic act than industrial drawing has to do with painting; why does this rhetoric remain so dear to those who call themselves "critics of the left"? -- maybe, after all, they are primarily hardcore pedagogues; but if we have always detested, for example, Pudovkin, de Sica, Wyler, Lizzani, and the ancient combatants of IDHEC(L'Institut des hautes études cinématographiques), it's because the logical culmination of this formalism calls itself Pontecorvo. Whatever the daily journalists think, the history of cinema isn't revolutionary every day. For a mechanic like Losey, the New York avant-garde doesn't disturb him any more than the waves on shore disturb the peace of the depths. Why? It's because some people don't ask themselves anything but formal questions, while others resolve them entirely in advance and will ask none afterwards. But what do those who actually make history say instead -- those whom one also calls "men of art"? Resnais will avow that, if such a film of the week gets the audience interested in him, nevertheless he has the feeling of being nothing but an amateur before Antonioni; Truffaut would say the same, no doubt, about Renoir, Godard about Rossellini, Demy about Visconti; and as Cézanne, despite all the journalists and reviewers, was slowly imposed by the painters, so the filmmakers (les cinéastes) will impose into history Murnau or Mizoguchi...