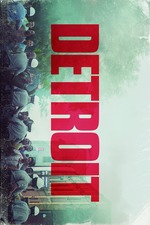 Join the conversation on The Twin Geeks discord

We’re busy ranking the entire works of Kathryn Bigelow on The Twin Geeks. Won’t you join us and follow our journey through her remarkable career? Point Rank!

Kathryn Bigelow turns from modern military stories to the militarization of the police in a shocking abuse of power in our criminal justice system.

When Detroit settles into a groove, having shakily established its sense of place while cutting but not committing to any characters, it finally builds to a film with a really sound middle and no walls to ultimately hold that up structurally.

The first hour or so is ultimately a waste of film. Shame when a film is pushing two and a half hours, to waste any time trying to say so much, when the film does ultimately say exactly what’s needed, but bookends it with fluff that distracts from the core of that message.

The message is the police are militarized, profiling, and act as a terrorist organization. Would you believe this is the same director who made Blue Steel, a film that shows the fetishization of police but is never about that? Well, Detroit is really about something.

It flails around that subject for a good long while and fails to support its characters, but there is catharsis and there is meaning that runs deep and understands the problems are systemic and rooted in entire structural error within the country’s policing.

Good riddance, there’s a hell of a 90 minute film in here. There’s just a whole other film on top of that truly not worth your attention.

It brings us back to a resounding and reoccurring marker in Bigelow’s career: when chiefly concerned with drama and using it to tell her stories, she’s always game. When she’s working on the messaging around all that and trying to create meaningful context and societal backbones for her stories, the work fails to captivate. But here, for about half the movie, we get a bit of both, and my opinion has shifted to a vauge appreciation, mixed with apprehension of whether or not I should ever see it again.