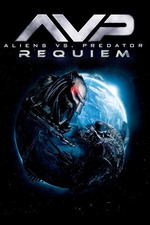 What the fuck did I just watch? They actually went with a R rating for this one but you can’t fucking see any of the gore or kills because it’s so damn dark. You can barely make out what the Alien/Predator hybrid looks like and I was actually interested because I thought they could have done something cool with that. I don’t want you to think this film is only bad because of how dark it is, because that’s certainly not the case. It’s bad in a multitude of ways; the story, characters, cgi, and it’s got some weird ass cinematography at times. Bottom line, this is a catastrophe. Do not watch this.